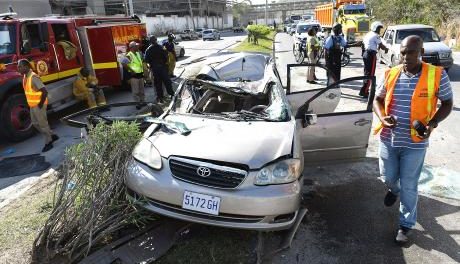 File photo from the scene of a deadly crash.

KINGSTON, Jamaica – More than 200 people have died in road crashes since the start of the year, according to statistics released today by the Road Safety Unit (RSU) in the Ministry of Transport and Mining.

RSU Director Kenute Hare has attributed the majority of the crashes to bad driving practices. So maybe it would be a good idea, to make people who passed their test when they were young, take another driving course when they are older (like the one found at myimprov.com). This might just help reduce the number of accidents that are occurring and help people become better drivers.

Of the 206 people killed in 190 fatal crashes, 49 were pedestrians, 14 were pedalcyclists, 66 were motorcyclists and six were pillion riders.

The RSU is appealing to all road users to wear their seatbelts, helmets, and other protective devices to save life, as well as, to pay close attention to road signs and markings.

Hare is also encouraging motorists who transport passengers, to ensure that they do so safely by enforcing the wearing of seatbelts. Pedestrians and pedal cyclists are also advised to wear bright coloured clothing at nights, and use reflective gears to ensure they can be seen at all times.

Pedal cyclists should also wear clothing that will make them more visible to other road users, especially in the nights. So far, St Catherine has accounted for 17 per cent of road users killed, the largest figure since the start of the year.