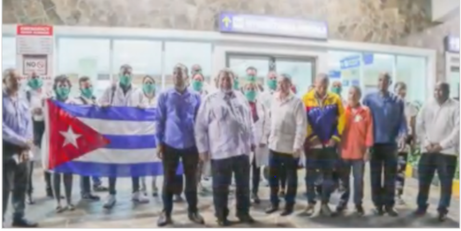 Watch out Saint Vincent and the Grenadines, Gonsalves got you in the doodoo again. By using Cubans to build our airport at Argyle, to develop and man the specialist hospital at Georgetown, and to bring the unnecessary Cuban doctors and nurses to manage our COVID 19 situation, the US will punish us, some think rightly so.

Florida Republican Sen. Rick Scott has called to punish countries that employ Cuba’s medical brigades to help provide care and to classify such nations as participating in human trafficking.

Last week, Scott, joined by Cuban American Sens. Marco Rubio, R-Fla., and Ted Cruz, R-Texas, introduced the Cut Profits to the Cuban Regime Act. If it passes, the bill would require the State Department to publish the names of countries that contract doctors through the Cuban government and to consider that as a factor in their ranking in the State Department’s annual Trafficking in Persons report.

The State Department has said Cuba’s medical program subjects’ doctors to “exploitative conditions” that are also “abusive.” Some doctors who have defected from the missions, and documents disclosed in Brazil, accuse the Cuban government of pocketing almost 80 per cent of the money that countries pay toward doctors’ salaries, restricting their movements, and pressuring physicians to inflate statistics.

Ralph Gonsalves knows that the Cuban workers only get a small proportion of what SVG pays to the Cuban government, so therefore he is compliant in the overall scheme of the trafficking of Cuban workers.

Please, Uncle Sam, we the Vincentian people do not have a hand in bringing Cubans to SVG. It was comrade Gonsalves along with Health Minister Luke Browne, so if you must employ sanctions, please consider applying them to him, his family dynasty and Luke Browne. But if you decide we must all be punished for electing him and his family members, so be it, we are guilty as charged, or are we?

Please take into consideration that we the people allege that the regime was elected due to fraud, most of us did not vote for them and do not want them. We are hoping and praying we may soon return to democratic leadership; at that time, we will butt kick the Cubans out of SVG, we are under their evil control via our leadership.

The Cubans and Venezuelans fund the ULP during elections, what do the US sanction makers think about that? we need help to get out of this spiral of evil.