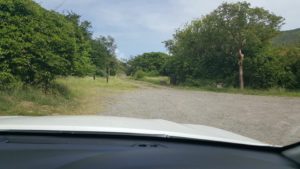 BASSETERRE, ST. KITTS, FEBRUARY 6TH, 2018 (PRESS SEC) — The longstanding barrier that restricted public vehicular access to the beach at Sandy Bank Bay since 2009 is now gone, thanks to effective dialogue initiated by the Prime Minister of St. Kitts and Nevis, Dr. the Honourable Timothy Harris, and his Cabinet with the principals of Christophe Harbour Development Company.

This significant development came after Prime Minister Harris and his Team Unity Government listened to citizens’ concerns about inconvenient public access to certain areas on the southeast peninsula and sought, through engagement, to arrive at a reasonable solution in this instance.

The move to engage the principals of the 2,500-acre Christophe Harbour resort and residential development also comes roughly two months after Prime Minister Harris declared that his Team Unity Government would defend the public’s right to access any and every beach in St. Kitts and Nevis.

“All beaches belong to the Government,” Prime Minister Harris said at his monthly press conference on Wednesday, November 29th, 2017 in response to a reporter’s question.  The question referred to a recent wave of public debate and concern over whether beaches, especially those in tourist areas, would remain accessible to the general public at all times.

“I think it has long been established that there is a public access to every beach in St. Kitts and Nevis, and that is something which Team Unity as an administration will honour,” the Honourable Prime Minister also said, referencing Chapter 11.03 of the National Conservation and Environment Protection Act, Part VII, Clause 28, which is titled “Beach vested in the Crown with public access.”

“So simply put, at all times, citizens and residents in St. Kitts and Nevis must have access to a beach, and where that access is not provided the law empowers the Government to act in the public interest to secure that access,” Prime Minister Harris, who is also the Minister responsible for Sustainable Development, said last November.

The major development also follows on the heels of another meeting that Prime Minister Harris and his Cabinet initiated, this time with operators of ShipWreck, Godfather, Discovery and Sunset Beach Bars in order to discuss the matter of their leasehold tenancy at South Friars Bay.

“They entered lease arrangements and consented to vacate the demised properties within one month’s notice.  What they want now from the private owner of the lands is facilitation,” the Prime Minister of St. Kitts and Nevis explained at his press conference last Thursday, February 1st, adding, “My Government has requested and received confirmation that the seller and buyer will avail themselves for a meeting with the Government to see how best a facilitation can be provided.”

At last Thursday’s press conference, the Honourable Prime Minister noted that, “Truth be told, all lands at the Peninsula are now privately owned, not government owned.  Indeed, when the former discredited Douglas administration acquired lands there, they ceded such lands to foreign private interests.”

Prime Minister Dr. the Honourable Timothy Harris also said at that press conference, “We are stepping up for the operators because we care.  We are stepping up because we are a Unity Government and we will never abandon our people, nor will we ever be indifferent to the legacy of history, our struggles and victories and the call of our conscience to be not just on the right side of history but, more importantly, on the right side of the people.”