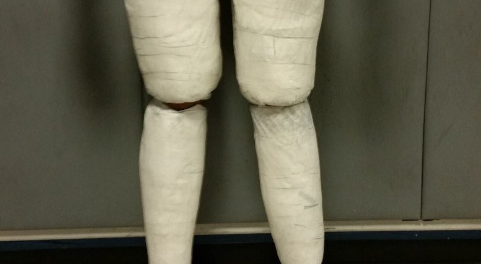 HUFFINGTON  POST – A man who police described as “busting out of his pants” was arrested at a New York City airport on Friday when officers found his legs were heavily strapped with cocaine, according to U.S. Customs and Border Protection.

Officers said that Juan Carlos Galan Luperon was packing 10 pounds of the illegal substance, worth an estimated $164,000, when he arrived at JFK Airport from the Dominican Republic, authorities said Friday.

“During his examination, Mr. Luperon exhibited numerous signs of nervousness and his pants appeared to be rather snug,” U.S. Customs and Border Protection said in a press release.

A photo that New York City Customs and Border Protection shared shows why.