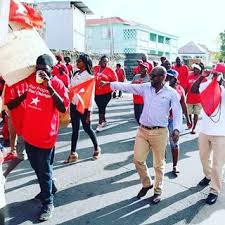 BASSETERRE, St. Kitts — The results of the 2015 general elections was a clear sign of a change in the political landscape in St. Kitts and Nevis and that change was further solidified on Oct. 15 when an independent national survey by Caribbean Development Research Services (CADRES) confirmed that the St. Kitts and Nevis Labour Party has lost even more grounds with the electorate.

CADRES Director Peter Wickham, said that if an election were to be held at the time of the poll, the Team Unity movement would have not only been re-elected but would have increased its Parliamentary seats.

In response to the party support question, the CADRES poll found that Team Unity has at this time been promised 45 percent of the total popular vote, while Labour/NRP would receive 27 percent.

The poll also demonstrated that a majority of Kittitians and Nevisians are convinced that St. Kitts and Nevis is on the right track or heading in the right direction under the Team Unity administration. It must also be noted that the 17 percent of those who think the country is heading in the wrong direction were identified as Labour Party supporters.

The “Right Track/Wrong Track” question is one of the key indicators of voter satisfaction used by CADRES.

One thousand persons across all 11 constituencies in St. Kitts and Nevis were surveyed using face-to-face interviews. Those surveyed were chosen based on a specific age and gender criteria, without respect to the type of house, race or any other factor.