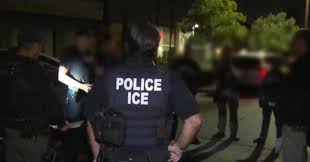 ICE Raids Are Coming to 9 Major Cities on Sunday. Here’s What You Need to Know.

Undocumented immigrants scheduled for deportation will lock their doors this weekend as federal agents scour some of the largest U.S. cities looking to make arrests. They’ll take sanctuary in churches. They’ll keep their lawyers and advocates close.

But they’ll be ready.

Immigration and Customs Enforcement agents are expected to swarm nine major cities on Sunday to arrest thousands of undocumented family members in a massive, multi-day raid, according to the New York Times, which spoke to three anonymous officials on the matter. The raids were supposed to start two weeks ago but were postponed after Democrats objected. Raids are typically a surprise, but media attention and the postponement allowed advocates time to prepare.ADVERTISEMENT

The target cities include Los Angeles, New York City, Chicago, Houston, Atlanta, Baltimore, Denver, Miami, and San Francisco. New Orleans was initially on the list, but ICE operations there were suspended due to tropical storm Barry.

While the raids are meant to target 2,000 undocumented immigrants who have already received deportation orders, they’ll also likely result in “collateral” deportations that sweep up not-targeted immigrants who happen to be nearby during arrests. Already, a massive family detention center in Dilley, Texas, has stopped admitting new detainees so it can clear more room for the families immigration officials expect to sweep this weekend.

But it’s unclear how successful the raids might be in achieving the goal to break up families and send people back to their countries of origin, since President Donald Trump tweeted about the raid weeks ago and gave immigrants and advocates ample time to prepare, change addresses, and read up on their legal rights. (When ICE officials are choosing which immigrants to target, they’ll typically gather data like a person’s last address and place of employment.) Trump criticized the mayor of Oakland, California, for similarly giving immigrants a heads-up ahead of a raid last year.

“The immigrant community knows that this is coming, and we’re doing everything we can to prepare,” said Omar Angel Perez, the lead organization for the Congregation Action Network in the D.C. area.

The ICE raids were scheduled to take place in late June, but Trump postponed them after Democrats expressed outrage. He handed them an ultimatuminstead: reach a Congressional deal on asylum reform and emergency funding for the border, or the raids would be rescheduled. Congress failed to take action within two weeks, and it was widely reported earlier this week that the raids were back on. ICE has repeatedly said it doesn’t comment on the timing or details of planned operations.

Still, advocacy organizations had time to host know-your-rights trainings, and churches had time to see if their congregants would be willing to take in families hiding from ICE.

Advocates have also been reminding immigrants that ICE agents aren’t allowed to force their way into a home if they don’t have a warrant signed by a judge.

Plus, immigration officials typically won’t make arrests at hospitals, churches, or schools — turning some of those places into sanctuaries for immigrants.

That doesn’t mean people won’t be scared or intimidated into giving up their rights at their home or a sanctuary, though, said Fernando Andrade, a paralegal with the immigrant protection unit of the The New York Legal Assistance Group. He urged people who have to leave their homes or sanctuaries to go to work to form a contingency plan with family members in the event they’re arrested, and talk with their bosses.

He said his group has been urging immigrants to carry so-called “red cards” offered by the Immigrant Legal Resource Center. The cards offer a script recommended for non-citizens who are approached by law enforcement, reading “I do not wish to speak with you, answer your questions, or sign or hand you any documents based on my Fifth Amendment rights under the United States Constitution.”

READ: Why Jews are getting themselves arrested at ICE centers around the country

“We’re not sugarcoating anything — this might happen,” Andrade said. “If ICE comes to your door, don’t open the door. Be firm. It’s going to be hostile. Ask them if they have any warrant.”

“If ICE comes to your door, don’t open the door. Be firm. It’s going to be hostile. Ask them if they have any warrant.”

The American Civil Liberties Union also filed a preemptive lawsuit Thursday demanding any arrested immigrants receive a fair court hearing ahead of any deportation process, since they may have missed a previous court hearing due to bureaucratic errors or ignorance of the system.

It’s not uncommon for immigrants and asylum-seekers placed on the U.S. immigration system’s fast-tracked docket programs to miss their initial hearings. Undocumented immigrants might lack legal representation or awareness of how the U.S. immigration system works, putting them at risk for deportation orders. Nearly 100 percent of migrant families who have legal representation and know they need to appear in court do show up, according to the Syracuse University-based Transactional Records Access Clearinghouse. That’s why some advocates find Sunday’s sweep unfair.

“For the many families who came here as refugees fleeing violence, deportation is a death threat. We will fight to ensure no one faces this kind of peril without having their case considered in court,” Donna Lieberman, executive director of the New York Civil Liberties Union, said in a news release Friday.

Cover: In this Oct. 22, 2018, photo U.S. Immigration and Customs Enforcement agents surround and detain a person during a raid in Richmond, Va. (AP Photo/Steve Helber)