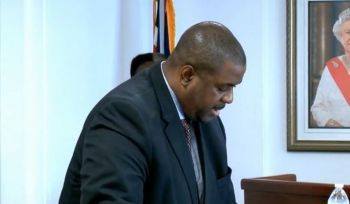 ROAD TOWN, Tortola, VI – Premier and Minister of Finance, Honourable Andrew A. Fahie (R1) has revealed that since becoming Premier of the Virgin Islands (VI) there have been three major threats of assassination to his life and that the matter is now classified a national security issue.

The Premier dropped the bombshell news when the Second Sitting of the First Session of the Fourth House of Assembly (HoA) commenced today Thursday, April 25, 2019, in the Assembly’s Chambers in Road Town, where he noted that Commissioner of Police, Michael B. Matthews of the Royal Virgin Islands Police Force (RVIPF) is already on the case.

“Since becoming premier it is now documented through authorities that I have received three major threats of assassination. And I want to tell these three entities here today, that you aren’t going frighten me from doing the business of the people,” the Premier told the House.

“I don’t like to know that Taxpayers have to go through that. As a matter of fact Mr Speaker, I bring it up because I noticed that before I got to make a speech, there are those making fun of it. But I don’t take nobody making fun of my life,” he said.

The Premier noted that even before being elected, there were prophecies from religious leaders that he would lead the territory and that came to pass. He said the death threats to his life have also been prophesied and he was not going to take the threats lightly.

“I had to re-arrange how my life has been going and it has not been a nice time… One time I even paused and say, is this even worth it?” the Premier said.

“I use to be around this place free, free as a bird representing the people of the First [District] in this House doing what I got to do. Now because of some greedy people, that’s who they are, because we have a tip-off what it’s about… some greedy people, want to see if they can assassinate the Premier,” Hon Fahie said in noting that the Police already have leads that may point to corrupt officials.

The Premier further said that given the situation, personal security was necessary, hence the reason for his bodyguards.