Tweet
The United States Virgin Islands (USVI) are facing a communication crisis as families resort to social media to receive information on loved ones and the state of their homes in the wake of Hurricane Irma.

Media accounts of the record-breaking storm have focused largely on Florida, but comparably little attention has been paid to the status of people and devastation in the USVI, which felt Irma as a Category 5 hurricane. Information on the territory’s three main islands – St. John, St. Thomas and St. Croix – is available sporadically at a local level.

There have been conflicting reports on the death toll. A Friday evening report in the St. Thomas Source, a local publication based on that island, reported four deaths across the USVI, including three on St. Thomas and one on St. John. Time stated the number of casualties was only three.

The Status On The Ground

In the hours before Irma ravaged the American territory and in the days after, those with connections to the USVI have relied solely on social media and word-of-mouth to get information on missing loved ones and the status of property.

“A lot of people are without phone or internet access, making it difficult for family members overseas to contact them,” said Brooklyn, NY resident Cameta Warner, who is originally from Anna’s Retreat on St. Thomas and has been in touch with her sister who is on island.

“The ones that do have internet are taking advantage and taking pictures and using Facebook Live to record the aftermath of the island.”

Based on the information she’s received, Warner said patients at the island’s Schneider Regional Medical Center have been evacuated to St. Croix and Puerto Rico, which was confirmed by the St. Thomas Source. She said that the patients on the fourth floor had to be moved to the third floor during the storm. But then the third floor started flooding. Not to mention, the roof was heavily damaged, almost on the verge of falling, which likely means that only professionals like the ones who work with companies providing commercial roofing in Denver would be able to help fix it. However, reaching anybody outside the damage zone is not possible without phones or internet, as was the case here.

Twitter user @Iceleg provided a firsthand look at the hospital damages with a set of photos, shared on the social media platform. 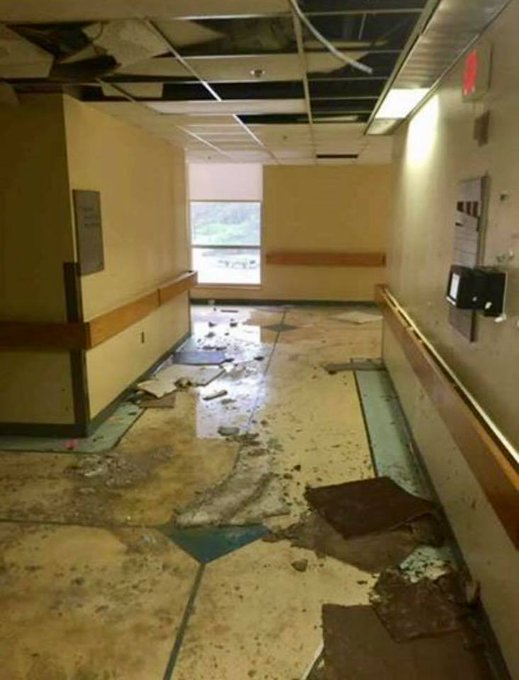 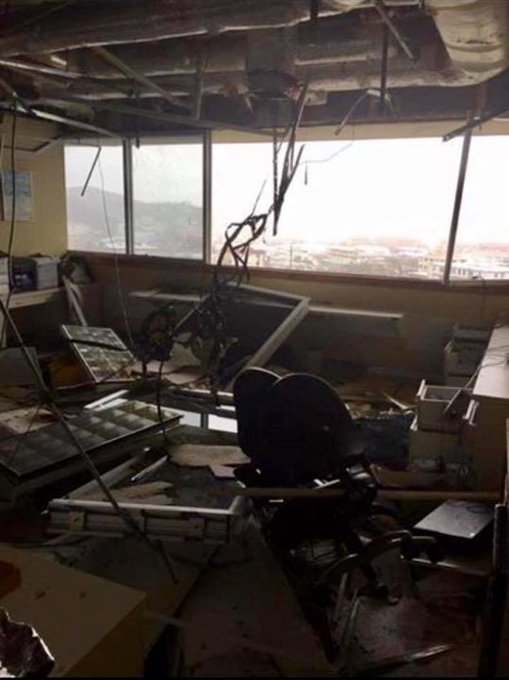 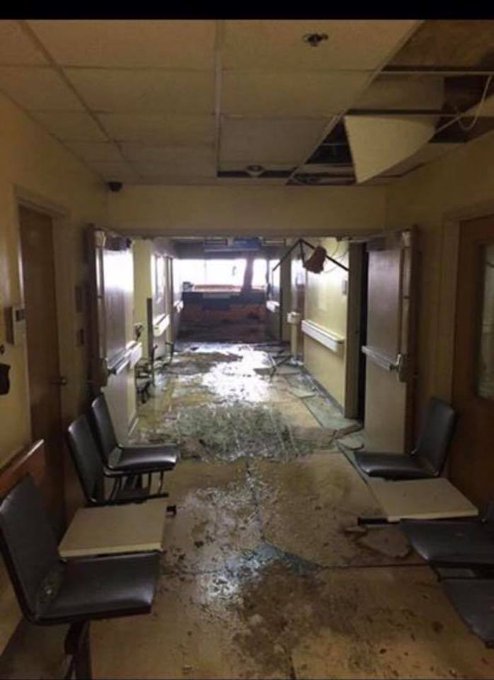 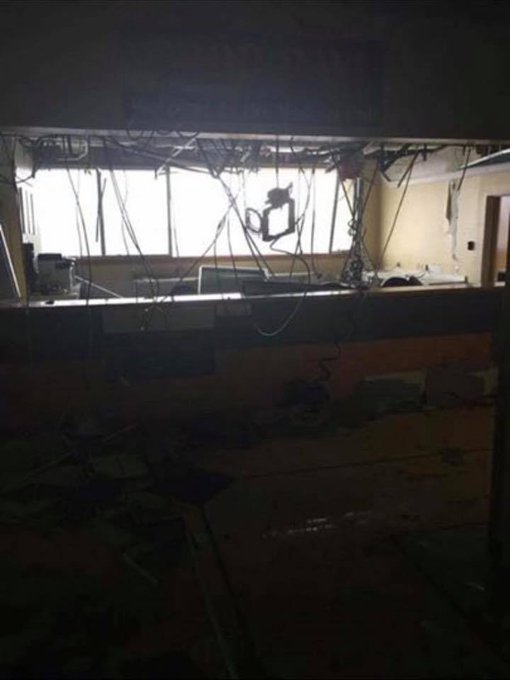 Worsening the already dire situation is the condition of The Cyril E. King Airport, which is the only way to fly into St. Thomas. The nearby island of St. John is only accessible from there via boat. A press release on The Virgin Islands Consortium indicated the airport “will be closed for commercial flights until further notice.”

Social media users desperate to find ways into and out of the USVI have struggled to find status updates on the airport from the usual media sources. But a single photo from Iceleg seems to show the grim state of the territory’s transportation hub. 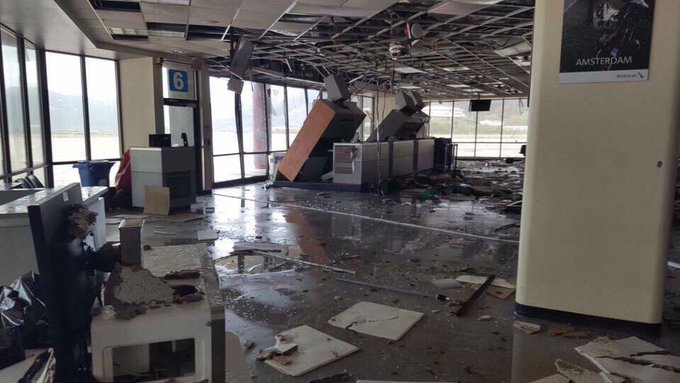 Over on St. John, people are relying on grassroots Facebook groups like The Stateside St. Johnians Alliance for Hurricane Irma and St. John Roll Call – Safe From Irma.

Jamie Regan is group admin of the Stateside St. Johnians Alliance page. While she isn’t currently on island, she calls it home and has many friends there, including one with a seven-month-old baby. She said the group was started as a way for islanders to keep in touch in anticipation of Hurricane Irma, but “we didn’t know the storm would be like this.” Since the page was started earlier this week, Regan said membership has ballooned to nearly 12,000.

“Since Wednesday, my body has been full of chills. It’s good chills and bad chills,” Regan said of the emotional experience of feeling devastated by the hurricane and simultaneously grateful for the community that’s rallied together.

According to Regan, app developer Noah Weinthal, who has family on the island, has offered to create a kind of check-in app that would help those with family on St. John find out if their loved ones are safe. The Irma Safety Check app, which Regan says Weinthal built in an hour, has become a master list for all those looking for information on loved ones.

Regan said the only internet on the island is currently at Ronnie’s Pizza and Mongoose Junction, both in Cruz Bay. She also spotted a line of around 300 people waiting to use a satellite phone in Fish Bay, post-Irma.

Lauren Saia, a St. John resident who is currently in Andover, Mass., said she’s been separated from her fiancée, Marty Bruckner, who is on island. He’s been able to call when he has a moment to borrow someone’s phone, so she knows he’s staying in the remnants of a structure that was destroyed by the storm.

“I don’t really know how to put it into words [how I’m feeling],” she said. “I just feel very helpless…He’s there and I’m here. We had all these plans and now everything is changed.”

Communication has been particularly sporadic from St. John’s Coral Bay, a community located approximately eight miles from the island’s main town, Cruz Bay. Coral Bay residents have had minimal contact with the outside world, with reports there was only one satellite phone working in the entire town.

On Friday evening, a photo was uploaded publicly to Facebook with a handwritten list of Coral Bay residents who had been seen and confirmed safe.

Regan said there have been reports of someone walking the eight mountainous miles from Coral Bay to Cruz Bay to check on neighbors, since roads are impassable. When her friends made the drive from one side of the island to the other, Regan said it took four hours due to debris in the road.

There are reports Coral Bay may not have power until the early months of 2018, Regan said.

On St. Croix, which is located 40 miles away from St. Thomas, damage was less severe than it was on St. John or St. Thomas. According to the St. Thomas Source, St. Croix residents are focusing on helping neighbors on its sister islands.

A Lack of Coverage

Those with connections to the USVI are asking people to remember the territory.

Erika Staud, of San Jose, Calif., said her grandfather lives on St. Thomas, and they haven’t had any contact with him yet.

“I have family in Florida and am really worried for Florida, so I understand all the coverage,” she said. “It seems the media hasn’t really talked about all the damage in the islands that just happened … I think a big part of it is just the fact that the islands impact a smaller subset of people compared to mainland America.”

Saia echoed Staud’s frustration. “I think the hardest part is just watching it from here,” she said.

“The news was just saying Irma wasn’t going to make contact with the U.S. until it hit Florida [when it was going through the Virgin Islands]. It just doesn’t make any sense,” Saia said. “Now that Irma’s going to Florida, we’re basically just going to disappear.”

Homer Hickam, author of Rocket Boys, which was basis for the movie October Sky, owns a home on St. John and has a long history with the USVI. The author served in Vietnam with a solider from St. Thomas and called him “one of the best [he] knew.”

Hickam said St. John has always been supportive of the United States, but he’s concerned the region will be overlooked. “I was on St. John when 9/11 happened and the entire island erupted in a sea of red, white, and blue. Flags were everywhere,” Hickam said.

“Now, in their greatest time of need, many on the islands are feeling abandoned. Food and water is running out, and there isn’t enough shelter for those who’ve lost their homes. These are Americans, and they are suffering,” he added.

Regan said the first media requests she received on the Stateside Alliance page were from Al Jazeera and the BBC.

“There was virtually no news coverage. They had information on the Turks and Caicos, St. Martin, they all received coverage…They called the British Virgin Islands the British Islands … It’s very frustrating for those of us who live there or have lived there,” she said, equating the feeling to “screaming into the void.”

Some of the biggest exposure the Virgin Islands have received are from celebrities with a personal connection to the region. Former San Antonio Spurs player, Tim Duncan, originally from St. Croix, in a statement Friday on The Players’ Tribune asked people to remember the USVI. 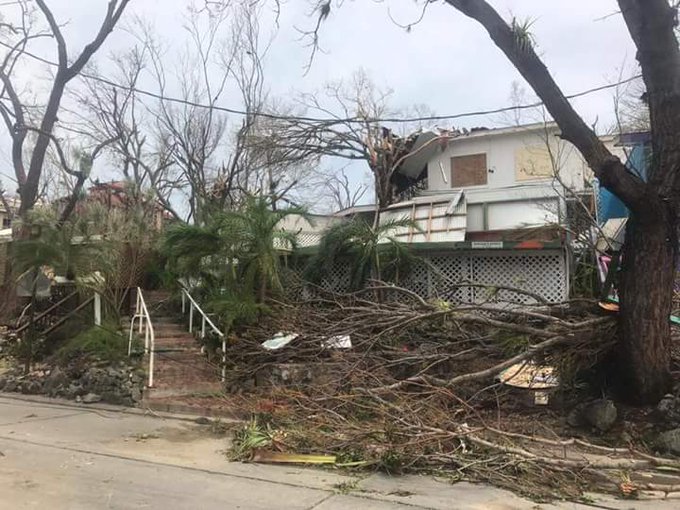 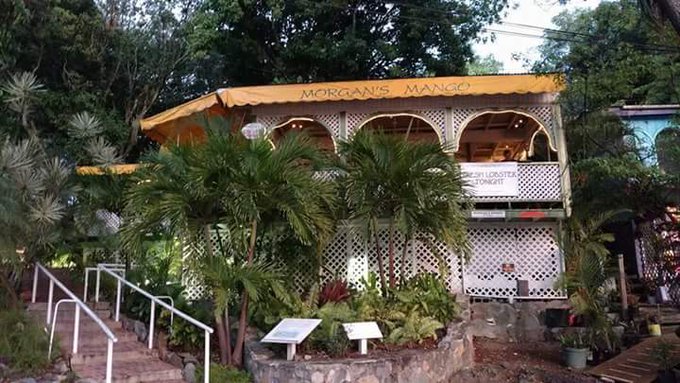 “Right now as I type this, the U.S. Virgin Islands – the place where I was born and where I grew up – has been badly damaged by Hurricane Irma,” he wrote. “The people there, many of whom are old friends of mine, are suffering.”

Kenny Chesney has also stepped up to the plate. The country singer has a home on St. John that was destroyed in the storm. Despite his loss, Chesney has started the Love For Love City Foundation, which will provide relief to the USVI and nearby British Virgin Islands.

“God bless that man,” Regan said of Chesney and his efforts.

Despite certain things being “disheartening,” or seeing her beloved home “in disarray,” Regan said the outpouring on social media has reinforced the strength of the community she loves.

“It’s just amazing to me that so many thousands of people have wrapped their arms around their little island,” Regain said. She said reminders of the strength of St. John’s community are coming from all places – both on the ground and online.

In Cruz Bay right now, people are helping each other survive the wake of the storm. FRestaurants have let people take food and cook it in the few operating kitchens to feed islanders, Regan said. 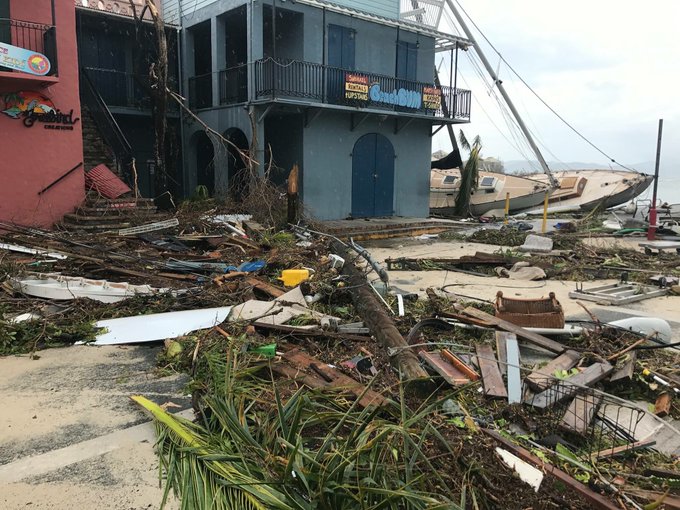 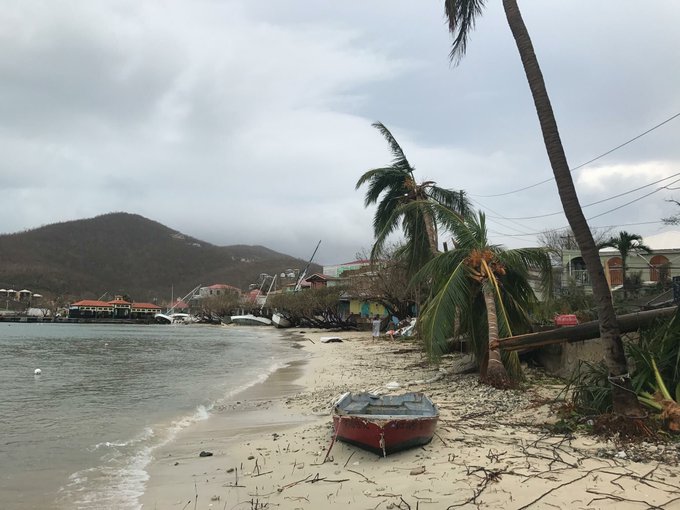 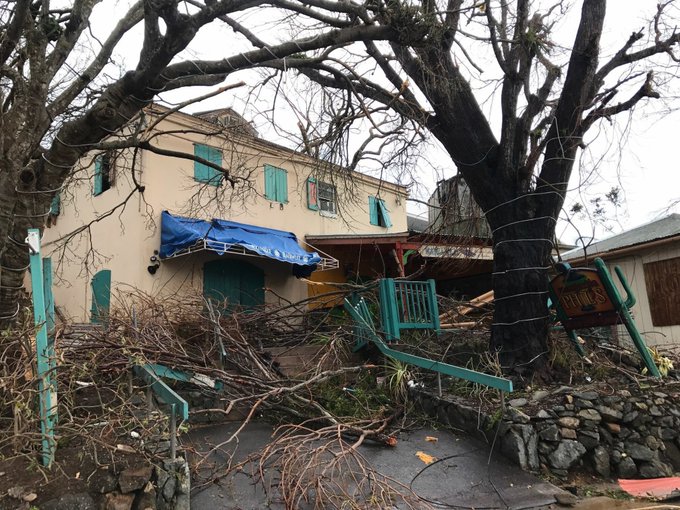 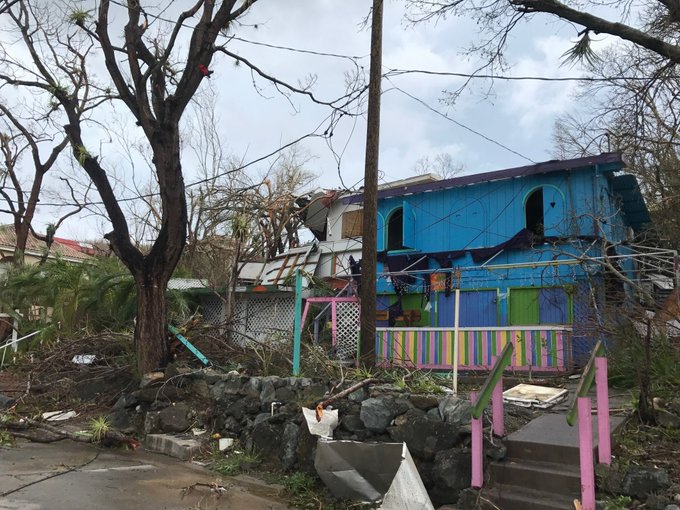 Meanwhile, the community online refuses to sleep. People continue to help each other find family members and have even asked about the status of the island’s “critters,” like St. John’s famous donkeys. From property restoration services with similar caliber to Milwaukee Water Damage Restoration Services to food supplies being handed out, the community is doing its best to help each other out.

Of her beloved home, Regan said: “check-in be back. It’s one of the most unique and amazing places I’ve ever lived.” Referencing the cck-in list made with marker and cardboard, she added: “Who has a community check-in like Coral Bay?”

“[St. Johnians and U.S. Virgin Islands residents are] resilient, they’re amazing and hellbent on surviving. [But] these islands can’t be an afterthought. They need everyone.”