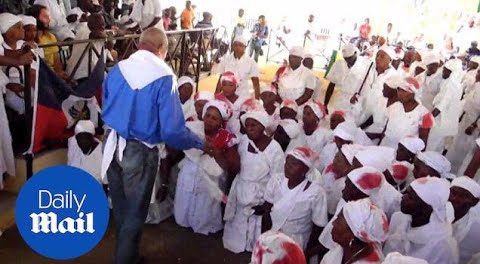 Hundreds of Haitian Voodoo followers gathered for the annual religious ceremony in Souvenance a suburb of Gonaives, north of Port-au-Prince, on Easter Sunday. Believers make the made the annual pilgrimage to their holy temple, Souvenance Mystique, where they expressed their devotion to the spirits – loas – by taking part in a number of rituals. Each year, followers dress in all-white, sacrifice animals, bathe in a sacred pool and dance themselves into a trance as they celebrate one of the holiest days in the Voodoo calendar.

Worshipper lays in a trance while partially submerged in water.

People look on as a worshipper lays hands on a woman calling on the spirits.

Haitian woman lays hands on man during a ritual.

Worshippers on their way to take part of a ceremony.

Spectators look on as worshippers prepare a bull to take part in a ritual.