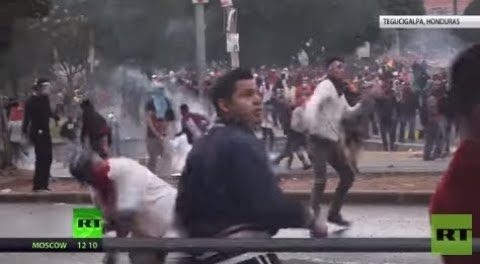 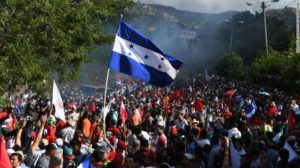 Thousands of supporters of the presidential candidate for Honduras’ Opposition Alliance against the Dictatorship, Salvador Nasralla, hold a demonstration claiming that he won the November 26 elections, near the Supreme Electoral Tribunal in Tegucigalpa on December 3, 2017.
Honduras aims to resume the vote count to define the winner of the November 26 elections between President Juan Orlando Hernandez and the opposition candidate Salvador Nasralla. One young woman was killed and at least 12 civilians have been wounded during violent clashes sparked by Nasralla’s call for his supporters to take to the streets. / AFP PHOTO / ORLANDO SIERRA (Photo credit should read ORLANDO SIERRA/AFP/Getty Images)

Story highlights
The electoral commission will recount votes under the scrutiny of both parties
A 6 p.m. to 6 a.m. curfew is mandatory, with some exceptions

Tegucigalpa (CNN)Honduras’ electoral commission announced a recount of some votes cast in last week’s unresolved election, which prompted days of unrest that has claimed lives, and forced the government to impose a nightly curfew in an attempt to control protests.
On Sunday, the electoral commission began to review ballots that showed irregularities. The recount will be conducted using a special procedure that puts the process under the scrutiny of both political parties, international observers and the media.

“We feel that the Honduran people, as we said yesterday, deserve a result, and that result cannot be stopped or be in the hands of any presidential candidate or any party,” David Matamoros, president of the electoral commission, Tribunal Supremo Electoral (TSE), said in a press conference Sunday.
A week after the November 26 election, Honduras still doesn’t know who the president will be. Opposition candidate Salvador Nasralla, a prominent TV star, has accused incumbent President Juan Orlando Hernandez of manipulating the election results. Hernandez has not responded to the allegations.
Ballots from 1,000 voting precincts showed irregularities after the electoral commission’s voting system shut down on Wednesday while the count was ongoing. Narsalla alleged the shutdown was part of an attempt by the government to manipulate the vote. On Sunday, he told CNN he would only accept the results if 5,000 precincts were reviewed.
The electoral commission had planned to conduct a recount on Saturday morning, but the process was delayed after the opposition party failed to show, Matamoros said. Both parties were supposed to be involved in the process.
Thousands protest on Sunday
On Sunday, thousands of Nasralla’s supporters took to the street in Tegucigalpa as part of a largely peaceful demonstration. Many of them, demanding a recount, told CNN that they marched because they felt cheated, not because of their ideology.
“It’s a symbolic act, to show that we are marching for our children’s future that is being stolen by corrupt politicians,” said Raul Lopez, who was marching with his wife and two young daughters.
Young people were participating to show their generation has a new mentality, said 24-year-old Cara Mendoza, who added they wanted change for their country.
Nasralla joined the three-hour march, shaking hands and kissing babies.
At least 11 people have died and 15 others have been injured during the post-election protests, according to the Inter-American Commission on Human Rights and the Office of the United Nations High Commissioner for Human Rights in Honduras. It was not immediately clear where the deaths occurred.
Without confirming figures, the spokesman of the Armed Forces, Jorge Cerrato, and the spokesman of the National Police, Jair Meza, told CNN that investigations are underway to determine who is responsible for the deaths
Nightly curfew put in place
After protests broke out, the government on Friday imposed a nightly curfew in an effort to quell the disorder. The 10-day curfew is in effect from 6 p.m. to 6 a.m. each day. Only cargo transport workers, emergency health workers, government workers and people involved with the election and electoral parties are exempt from it.
“The executive decree orders the arrest of any person found outside the circulation hours established by the authorities or who is suspected of causing damage to persons or property,” Jorge Ramón Hernández, coordinating minister of the government, said on national TV.
He ordered all state and local authorities to be at the disposal of the National Police and armed forces. 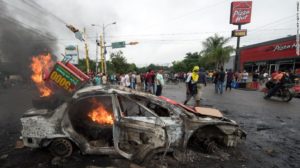 A car burns after being set on fire by supporters of Honduran presidential candidate Salvador Nasralla during post-election protests.

Army and National Police have also been ordered to clear demonstrators or people committing illegal activities from public areas, highways, bridges and private or public buildings.
The Honduran government lifted the curfew in the Caribbean area of Islas de la Bahía, the city of Trujillo and at the city and ancient Mayan ruins of Copán, which is considered one of the most visited attractions in the country.
Why are Hondurans protesting?
Protests erupted in the Central American country Thursday after widespread allegations of voter fraud in the presidential election.
Almost a week after the election, the country still has no officially declared winner, with both Nasralla and Hernandez having claimed victory.
With close to 95% of the ballots counted, the gap between the two candidates is less than 2% of the votes, with Hernandez leading the polls.
Nasralla backers protested throughout the country, most prominently in Tegucigalpa. They have blocked roads, burned tires, and the National Police reported widespread looting. Protesters have also clashed with security forces. 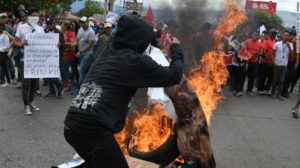 Supporters of the presidential candidate for Honduras’ Opposition Alliance against the Dictatorship, Salvador Nasralla, burn campaign posters of his rival, President Juan Orlando Hernandez, during a demonstration claiming that Nasralla won the November 26 elections, near the Supreme Electoral Tribunal in Tegucigalpa on December 3, 2017.
Honduras aims to resume the vote count to define the winner of the November 26 elections between President Juan Orlando Hernandez and the opposition candidate Salvador Nasralla. One young woman was killed and at least 12 civilians have been wounded during violent clashes sparked by Nasralla’s call for his supporters to take to the streets. / AFP PHOTO / ORLANDO SIERRA (Photo credit should read ORLANDO SIERRA/AFP/Getty Images)

Honduras Armed Forces said in a statement Sunday that despite the surfacing of “videos and photographs of violent acts that depict abuse of power by security forces, the military’s actions are shouldered by law and by unconditional respect for human rights.” However, any “arbitrary act” by a member of the forces will be investigated, the statement said.
Honduran media have reported multiple deaths during the protests. National Police spokesperson Jair Meza told CNN that police were investigating reports of protest-related deaths but did not give a number or address reported cases individually.
In a statement Friday, the National Police said they detained about 50 people throughout the country who were caught looting.
While the government has said the curfew is in place to maintain law and order in the country, some say it’s a power grab.
In a tweet, Nasralla condemned the curfew and said declaring the “curfew 12 hours a day while processing electoral ballots is the equivalent of a coup d’état in Honduras.”
“I condemn the repression and death that the Honduran people are suffering due to the coup by the president,” Nasralla said.
Heide B. Fulton, Chargé d’Affaires of the US Embassy in Honduras, said in a tweet that “election authorities need to carry vote count to completion freely and transparently, without interference.” She also wished that “all parties remain calm while that process unfolds.”

“There is a process in place to clarify ALL outstanding questions about the contested ballots. The political parties have a positive role to play,” she said on Twitter.

In a statement, Nasralla’s party had asked the electoral commission for access to ballot boxes, voter databases and voter breakdowns, and it demanded a recount in three areas of the country where turnout was uncharacteristically high.
“Throughout the country the voter participation was 50-55%,” the statement said. It added that the areas of Lempira, la Paz and Intibuca saw a voter turnout of more than 70%.
Voting data available on the electoral commission website shows that in all three areas, Hernandez has a significant lead over Nasralla.
It is unclear when the electoral commission will be ready to declare a winner and many outside observers, such as the Organization of American States and the United Nations, have called on both candidates to wait for the final results before declaring victory.
For his part, Hernandez has called for his supporters to act peacefully and display calm. He has also said he will accept the election results, regardless of the outcome.