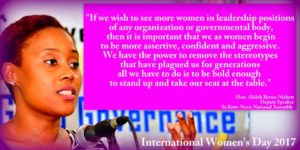 Let me start by saying what an honour it is to have been asked to say a few words today at this our celebration of International Women’s Day. Notwithstanding that I was advised that my address would be the “keynote address”, I promise to be mercifully brief.

The theme under which we celebrate International Women’s Day this year is “BE BOLD FOR CHANGE”. It is a theme at once evocative and provocative.  If we are to be honest with ourselves, this theme presents a most perplexing statement for us women.

Being bold for change requires a woman to be, well, bold, courageous and confident. However, for decades women have been conditioned to believe that being a woman and being bold, courageous and confident equates to being a woman who’s egotistical, domineering, abrasive or crude. All terms, we would agree, which have negative connotations associated. The challenge that this theme creates, however, forces us as women to begin to consider defying our conditioned beliefs. 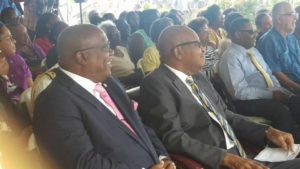 A recent study conducted by psychologist Lin Bian of the University of Illinois and posted on the Atlantic in January of this year, suggests that by the age of 6, girls begin to develop the mindset that brilliance or being smart were attributes associated with boys as opposed to girls. The study that Dr. Bian conducted with a group of boys and girls aged 5 to 7 was twofold. She first relayed a story of a “really, really smart” and special person in a work place who was able to figure things out quickly and come up with answers much faster than anyone else. She then showed the group pictures of four adults, two males and two females and asked them to identify who the really smart person was. Amongst the 5 year olds she found that their choice was gender biased.  The boys chose the males and the girls, the females. Amongst the 6 to 7 year olds however, she found that the girls associated brilliance to the male figure and, of course, the boys continued to identify brilliance to their gender.

What was even more interesting was the second part of the study which introduced the children to two different types of games. One which Dr. Bian identified as a game for persons who were really, really smart and another for persons who try really, really hard. Again, amongst the 5 year olds both the girls and the boys were equally enthusiastic about both types of games, however, amongst the 6 to 7 year olds the girls were more inclined to choose the games that required them to work hard versus those that were considered to be for the smart kids.

What this study reveals, is that, as early as age 6 seeds of this, as one author puts it “pernicious bias” are being planted in the minds of girls. Girls are being fashioned into the mindset that they must shrink themselves or make themselves small, that they are not smart enough and thus are incapable or less than their male counterparts.

This brings me back to my earlier statement that our theme for this year’s International Women’s Day is indeed most perplexing for us women. For how can a woman who from the age of 6 has already determined that she must always play the supportive role now be expected to “Be Bold for Change”?

Whilst the studies such as those of Dr Bian are important and speak to the conditioning that so many women the world over endure, us women and especially us that special breed of women reared in the Caribbean, have demonstrated our own truths and forged our own reality.

Throughout history we have proven that, despite the stereotypes being forced upon us, we have in fact been capable of being Bold for Change. For an example of this, we can look at the celebration of this day, International Women’s Day, and there we will find the Suffragettes who in the early 1900’s forged purposeful action for equality. The Suffragettes are credited for having started International Women’s Day with the first officially named event held in 1911. It was the bold action of this group of women that gave women around the world that voice which became the right of women to vote. These women were willing to take bold and decisive measures, measures unheard of at this time in history in order to see women taking part in the democratic process and having the right to vote. These women were Bold for Change.

In our Caribbean we have seen women such as Dame Eugenia Charles and Kamla Persaud Bissesser rise to lead their countries as Prime Ministers. We see right here in St Kitts and Nevis the participation of women in our Parliament and in our Courts. Our Chief Justice of the Eastern Caribbean Supreme Court Dame Janice Pereira is our first female Chief Justice. Women are engaged in business, in our Churches, in our schools, in law enforcement and we continue our role as principal caregivers in our families. We are mothers, wives, businesspeople, politicians, lawyers, judges and we provide the critical cornerstone on which our societies are fashioned. It perhaps has always been so in fact but women the world over have had to be bold in order to effect meaningful change.

As we celebrate International Women’s Day here in St Kitts and Nevis let us however pause to reflect that not all women globally enjoy the freedom that we in our country enjoy. Not all are allowed to rise to their fullest potential and contribute significantly to their national development. Some are still dehumanized, victimized and treated as second class citizens. It therefore behooves us as women globally and our menfolk who cherish us to stand together shoulder to shoulder and boldly demand change. In some cultures this might not be easy but then again nothing worthwhile has ever proven easy.

I therefore end by admonishing us as women to continue to be bold for change and to never tire in demanding our rightful place in society. We must not forget the teachings of Holy Writ at 2 Timothy 1:7 that

“God has not given us a spirit of fear, but of power and of love and of a sound mind.”.

Let us use that power and love and sound mind to think and act boldly to effect meaningful change for women and for societies the world over.