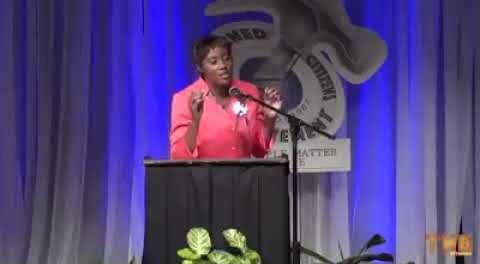 Hon. Akilah Byron- Nisbett, a political newcomer speaking on behalf of the People’s Labour Party, brought a Concerned Citizen’s Movement (CCM) conference to it’s feet this week with her worldview analogy using a  giraffe and turtle as subject matter.
Nisbett’s passion and energy leaked out into the crowd at the Nevis Performing Arts Center, and walked off the stage to raucous applause and shocked energy from onlookers.
“The election is nigh, are you ready?” Nisbett began after acknowledging protocol of those who spoke before her. She asked the question twice, each time emphasizing every word.
Nisbett centered her speech around giraffe vision and turtle vision, explaining how giraffes long necks and height allow them to see the entire world as it hums along, while a turtle can only focus on what is directly in front of it.
“Let me suggest that in your leadership of this concerned citizens movement you have giraffe vision,” Nisbett said. “A vision from 30 years ago that saw the benefits of coming together with the People’s Action Movement and the People’s Labour Party to form Team Unity at a benefit to the people of St. Kitts and the people of Nevis.”
The analogy gave Nisbett a sound footing to continue her plea, in an attempt to convince all ears she found her way into that the vision of this party is one made with the whole country in mind. Inspired by accomplishments of those who came before her, Nisbett ran off a list of improvements she has seen to the nation during the CCM’s long reign.
Four minutes into her short speech, the beginning of each sentence was practically drowned out over the reception of the one that came before it. Nisbett urged listeners to vote with those who had giraffe vision, and be wary of the traps of turtle vision.
To round out her argument, Nisbett leaned on short, strong sentences to urge on the crowd that was now hanging on every word.
“Strong convention, strong CCM, people matter more,” Nisbett concluded. “We are here, we are moving and the PLP will continue to move forward with the CCM and the PAM.”
Party chairperson Hazel Brandy-Williams, who was also a host for the evening’s proceedings, acknowledged the reception of Nisbett’s speech.
“The strength of a women,” Williams said. “I’m hoping the young persons in the audience who have the aspirations to become politicians would take a cue from Akilah.”