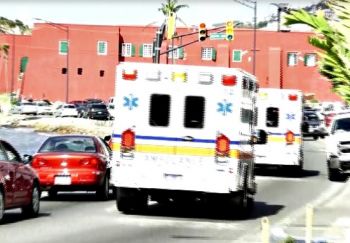 Haiti national Nathalie Premier, 40, of no known address, has been found guilty of third-degree assault, using a dangerous weapon during a third-degree assault, simple assault and destruction of property in connection with the December 22, 2016, assault of Dyane Hyppolite at the Bethlehem House for the Homeless in St Thomas, US Virgin Islands. Photo: VIC VI CONSORTIUM
Tweet
March 15th, 2018

CHARLOTTE AMALIE, St Thomas, USVI- Jurors in the US Virgin Islands (USVI) took less than two hours to convict a Haitian woman of beating her roommate, stabbing her with a knife and destroying her cellphone.

According to the [US] Virgin Islands Department of Justice Public Media Officer Corliss Smithen, after a day of testimony, the 10 women and two men returned a unanimous verdict Thursday afternoon March 8, 2018, finding Nathalie Premier, 40, of no known address, guilty of third-degree assault, using a dangerous weapon during a third-degree assault, simple assault and destruction of property in connection with the December 22, 2016, assault of Dyane Hyppolite.

The incident occurred at the Bethlehem House for the Homeless.

Several attempts by The Consortium to obtain Ms Premier’s mugshot were unsuccessful; the Deptartment of Justice said it should be sought from the VIPD, and as of late Tuesday March 13, 2018, the police department had not provided it.

USVI Superior Court Judge Kathleen Mackay has set May 4, 2018 as the date for Premier’s sentencing.

Hyppolite, 26, of Estate Nadir, told jurors that on the morning of December 22, 2016, she was awakened by the “constant venting” of Premier. Hyppolite got out of bed and went to the kitchen to get something to eat. Premier, at the time, was mopping the floor. As Hyppolite was on her way outside, she got into an argument with Premier. Later, as Hyppolite tried to re-enter the building, Premier blocked the doorway with the mop bucket. Hyppolite then squeezed her way inside, at which point she was struck twice with the mop handle by Premier.

In recounting the events, Hyppolite said she went to her room, picked up her cell phone and called 911 as she was walking outside. Hyppolite walked out of the property gate, still talking to the 911 operator, with her back turned toward the building.

“I felt like a needle shot in my back,” Hyppolite testified.  “I felt my hair being pulled. I was going back and I was being dragged by the defendant. As I was being dragged down the parking lot, I saw a shiny object in her hand; it looked like a knife with no handle.”

Hyppolite said after a struggle, she managed to free herself from Premier. Premier then picked up Hyppolite’s phone, which had fallen from her hand, and slammed it three times on the ground, breaking it into pieces. She threw the pieces at Hyppolite and spat on her. Hyppolite, at the time, was 12-14 weeks pregnant, Hyppolite said in her testimony.

Police and emergency responders arrived on the scene. Hyppolite was taken by ambulance to Schneider hospital where she was treated for knife wounds in her back, her shoulder and right arm, as well as multiple abrasions on her knees and other parts of her body, according to Dr Robin Ellett, the Emergency Room physician.

Premier took the stand and asserted that she acted in self-defense. Jurors, however, were not convinced and found her guilty on all four counts she faced.

Premier remains free on an unsecured bond pending her sentencing.