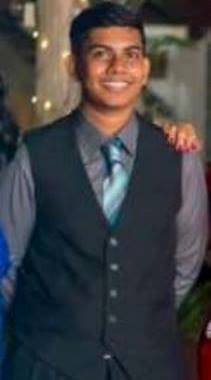 By Stabroek News Michael Bhopaul, 16, doesn’t know if he is this year’s best performer at the Caribbean Secondary Examination Certificate (CSEC) Examinations, but with preliminary results showing that he has obtained passes in 25 subjects, he will be hard to top.
According to the results that Bhopaul was able to access online, he has secured a total of 24 Grade I passes, representing Grade I passes in 23 subjects, including a double award for Agricultural Science, as well as a Grade II pass.
Speaking with Sunday Stabroek yesterday Bhopaul said he decided to attempt the large number of subjects “for fun” but when he told his parents and teachers what he intended they were not amused.
“I initially wanted to write 27 subjects. At the beginning of fourth form [during streaming], when I told my parents and teachers, everyone was saying don’t do 27. They were convinced it was too large a workload, too much pressure for me. Many of them said you might just trip out,” he laughingly shared.

Despite these dire predictions, the 2012 Grade Six top student dedicated his fourth year to proving that with determination, consistency and proper planning, managing 20+ subjects could not only be attempted but surmounted.
With the support of his cautiously accommodating teachers, he attended classes and sat internal examinations for 27 subjects.
“I performed well. Showed that I could do it, after which they were on board for the most part,” he explained.
Bhopaul is well aware of the debate that has been raging in relation to a possible cap on the number of subjects students are allowed to sit at CSEC and he told Sunday Stabroek that while writing 25 subjects is not for everyone, it showed him that he can define his own limits.
In June, a memorandum to various school heads included a proposal by the Ministry of Education to limit the number of subjects students can sit at CSEC.
The 25 Subjects in which Michael Bhopaul attained passes at this year’s CSEC Examinations
Former Minister of Education Dr. Rupert Roopnaraine, under whose tenure the memorandum was crafted, has repeatedly stated that he believes Guyana’s children are not well-rounded enough because they are studying too many subjects while not engaging in enough extra and co-curricular activities.
Bhopaul notes that this is not necessarily true. “I understand the concern and wish to make clear that writing so many subjects is not for everyone. Both the teachers and the students need to be certain of their abilities. Someone wishing to write so many subjects must prove they can handle it,” he stressed.

Speaking about his own experiences, he explained that because the timetable does not accommodate such a large number of subjects, he was forced to alternate his attendance at classes and spend afternoon hours catching up with the content he missed.
Studying included both self-study and extra classes in 14 of the subjects he sat but it did not stop him from being active in numerous co-curricular activities. “I was on the debate team, actively involved in House competitions as a member of the D’Urban House Executive, participated in poetry performances, was a member of the choir for five years and competed in several science fairs as a member of the craft club. I’m not athletic but I have been and continue to be active in areas which interest me,” Bhopaul said.
He further explained that his organisational skills helped tremendously to lighten his load. “It’s all about planning. I didn’t find the School Based Assessments challenging because I finished them during the August vacation at the end of Fourth Form. I started early, finished early and had time to devote to other things,” he shared.
Asked to explain what’s next, Bhopaul said simply CAPE—the Caribbean Advanced Proficiency Examinations.
“I’ll be doing the CAPE Associate Degree in Natural Science. My emphasis will be on Physics and Mathematics, since I hope to study Quantum Physics. I’m fascinated by the idea of explaining particulate matter movements as waves,” he shared.
Asked what advice he would have for those who will be writing examinations next year, he offered, “Know what you want and work towards it.”
Additionally, for those who have not put up big numbers in relation to CSEC passes, Bhopaul advised that they not let someone else’s success define theirs. “If you know you have performed to the best of your ability, be happy and proud of what you have accomplished,” he stressed before extending gratitude to the people who made up his support system.
“I would like to thank God for His divine guidance and protection during my fruitful academic undertaking. I express gratitude to my parents for the continuous aid and encouragement which they offered to me during the turbulent course of my study. In addition, I express my sincerest thanks to my dedicated teachers,” he told Sunday Stabroek.
He also expressed thanks to the staff of Queen’s College, whose patience and cooperation paved the way for his success. “Thank you Ms. Jackie Benn for being not only an inspiration to me, but also for ensuring that I did not falter as I went in pursuit of my goals. Furthermore, I wish to express heartfelt gratitude to Mrs. Joy Browne-Skeete, Mrs. Eletha Stewart Johnson, Mrs. Kaylene Richardson and Mr. Patrick Bernard for their tremendous assistance which has been instrumental in my academic achievement,” he said.
Bhopaul also identified his extra lessons tutors Robert Carryl and Ingrid Fung as deserving of gratitude as well as Ms. Farley and Mr. Irwin Thomas of the Cyril Potter College of Education for their unconditional support.