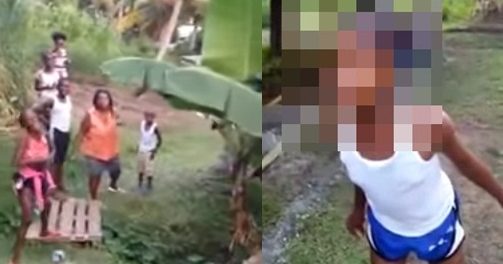 (GBN Television) – A video involving a minor engaged in using expletives has gone viral and evoked many concerns.
It has caught the attention of both law enforcement and child protection.
The video shows a young girl dressed in vest and shorts and hair adorned with accessories, and an adult surrounded by children, engaged in an argument, most of which was filled with expletive material.
Outrage has been expressed over the video on the paths of the child, the adult, and the videographer.
GBN News understands that it has become a major talking point, not only on social media, but amongst the authorities as well.
Our newsroom understands that teachers attached to the school, which the child attends, are in disblief and embarrassment over the incident.
Our inquiries into the incident led us to information that on Thursday, the Community Relations Department of the RGPF (Royal Grenada Police Force) reached out to the child, and that the Child Protection Authority has taken control of that aspect of the investigation.
As for the adult involved, the police say some charge may be laid, but it intends to advocate for whatever decision or decisions which may be made, that it is all done throgh the court system, to ensure that the matter is dealt with in the best manner, and that the issues involved are addressed appropriately.