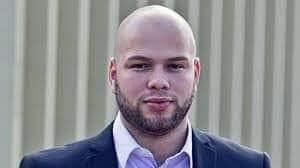 The grandson of Surinamese former president Desi Bouterse was reportedly found dead today in a building in the north of Paramaribo.The body had a gunshot wound. It is suspected that Walter Bouterse committed suicide, local media reported Tuesday evening. Police have launched an investigation.Walter is the son of Dino Bouterse who has been in an American prison since 2013. He has been sentenced to 16 years in prison for drug and arms trafficking and providing false passports.Walter is described on his Facebook page as ‘a young entrepreneur who works for the country and the people!’ During the period leading up to the May 2020 elections, he was occasionally in the news. He was then active in the youth board of the National Democratic Party (NDP), the party of which his grandfather Desi still chairs.The young Bouterse was also in the news because the opposition, including former rebel leader Ronnie Brunswijk, suspected him of removing boxes with ballot papers. Current President Chan Santokhi even called on the electoral office to intervene.