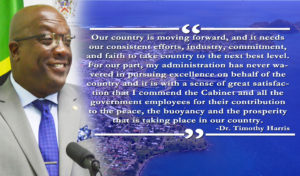 BASSETERRE, ST. KITTS, May 31, 2018 (PLP PR Media Inc.) — Team Unity-led Government of St. Kitts and Nevis has continued to demonstrate strong fiscal management for 2018 and Prime Minister Dr the Hon Timothy Harris is thanking his Cabinet colleagues and all Government employees for the contribution they have been making.

Prime Minister Harris, who is also the Minister of Finance, made the revelation at his monthly press conference held on Wednesday May 30 in the Parliamentary Lounge at Government Headquarter on Church Street, Basseterre.

“Today I have several items of good news to share with the citizens and residents of St. Kitts and Nevis,” Dr Harris said in his opening remarks. “St. Kitts and Nevis continues to do well and, in so doing, the realm of opportunities to our people is expanding. Objective observers and independent analysts continue to rate St. Kitts and Nevis among the best performing countries of the world on several indices.”

According to the Prime Minister, the Central Government continued to demonstrate strong fiscal management for 2018 noting that for the period January to March 2018, it recorded fiscal surpluses on Recurrent Account ($36.0m), Overall Balance ($23.3m), and Primary Balance ($27.1m).

“Our country is moving forward, and it needs our consistent efforts, industry, commitment, and faith to take country to the next best level,” observed Dr Harris. “For our part, my administration has never wavered in pursuing excellence on behalf of the country and it is with a sense of great satisfaction that I commend the Cabinet and all the government employees for their contribution to the peace, the buoyancy and the prosperity that is taking place in our country.”

The Prime Minister said in conclusion: “We remain focussed as an administration, and doing the people’s work. We are busy bringing homes to our people, making land available at more affordable terms, expanding the number of participants in business and industry. The good work of the administration will continue.”