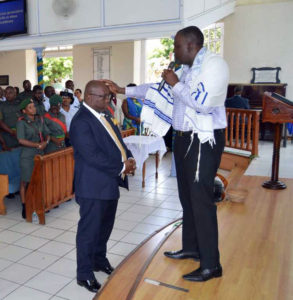 BASSETERRE, St. Kitts, August 31, 2017 (Press Unit in the Office of the Prime Minister) – St. Kitts and Nevis’ Prime Minister, Dr. the Honourable Timothy Harris, has always proven himself, through words and action, to be a God-fearing man, and has incorporated this faith in his leadership of the country.

The honourable prime minister attends worship services at various churches throughout the country each week. Recognizing the importance of God and the church to nation building, his Team Unity Administration created a Ministry of Ecclesiastical Affairs, which is headed by Senior Minister and Premier of Nevis, the Honourable Vance Amory.

This type of leadership style is being welcomed by members of the religious community, both here in St. Kitts and Nevis and further afield.

Pastor of the Tabernacle Church of the Nazarene, Reverent Christopher Weekes, told the Press Unit in the Office of the Prime Minister on Wednesday (August 30) that, “It speaks well of any leader who sees the importance of having God, not just as a leader, but in their own lives—who sees the importance of God being first place—and I saw that from the first time that I met the prime minister and that was before he was the prime minister. He struck me as an individual who just didn’t want to be around religion but he wanted to have God as a serious part of whatever he does.”

Reverend Dario Richards of the Church of the Nazarene Barbados District shared similar sentiments. He added that countries like St. Kitts and Nevis are in a unique position where God and the church still has the opportunity to play a major role in the affairs of the nation.

“Having a leader, a prime minister, who is not only vocally or verbally supportive but in practical ways such as visiting and inviting us out, in coming and just mingling and sharing with us, it definitely opens doors and raises the platform for a greater impact by the church. I believe if any nation is going to maximize its potential, the church must play a major role in that, so its excellent to see that some of the hindrances and barriers facing other countries with the church trying to live out what it’s supposed to be are just removed from St. Kitts and Nevis, and I think that’s a great thing,” Reverend Richards stated.

Prime Minister Harris worshipped at the Tabernacle Church of the Nazarene on Sunday, August 27, where he delivered a powerful and inspiring presentation to the congregation.

Mrs. Andrea Weekes, wife of Reverend Christopher Weekes, reflected on the prime minister’s message, stating, “The fact that he said it [St. Kitts and Nevis] is a nation under God and the fact that he mentioned that parents should ensure that their children come to church and not leave them at home shows that he has a strong foundation to lead this country.”

Reverends Weekes and Richards were part of a larger group of individuals, hailing from Antigua and Barbados, who were here in St. Kitts and Nevis as part of a Call to Serve Mission trip organized by the Church of the Nazarene to carry out cross-cultural missions.

While here, the group was involved in a number of community projects and initiatives, including the hosting of a health clinic, reaching out to and serving senior citizens, and carrying out landscaping and other beautification work in the Tabernacle community.