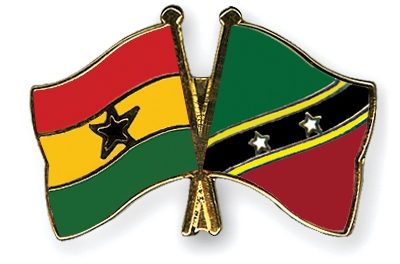 LONDON, June 10, 2020 /PRNewswire/ — Ghanaian MP Frank Annoh-Dompreh said that, this week, the parliamentary committee he chairs is considering signing a visa waiver agreement with the Federation of St Kitts and Nevis. This would involve a bilateral agreement for holders of diplomatic and service passports.

The Committee on Foreign Affairs scheduled a sitting on Tuesday to discuss a “Bilateral Agreement between the Government of the Republic of Ghana and the Government of the Federation of Saint Christopher (St. Kitts) and Nevis on the Waiver of Visa Requirements for Holders of Diplomatic and Service Passports”.

“This week, my committee in Parliament will be considering two things,” wrote MP Annoh-Dompreh on Twitter on Monday, who is also the Chairperson of the Foreign Affairs Committee in the Parliament of the Republic of Ghana. “First is to consider the details & modalities for establishing the African Continental Free Trade Agreement Secretariat in Accra. Secondly, we will be considering visa waiver agreements with 9 countries […] namely Malta, Venezuela, Jamaica, UAE, Qatar, Suriname, Guyana, St. Kitts & Nevis, and St. Vincent & Grenadines,” explained the Ghanaian MP.

The Federation of St Kitts and Nevis is the smallest country in the western hemisphere, with a population of around 55,000. It has had an impressive track record over the past few years in terms of fiscal management, decreasing criminality, tourism attraction and expanding visa-free travel. Most recently, it has become clearer that the twin-island nation is also politically stable, after Dr Timothy Harris secured another term as Prime Minister in the general elections on June 5, 2020.

Over the past five years, St Kitts and Nevis passport holders gained visa-free access to another 17 countries, thanks to Foreign Minister Mark Brantley’s efforts. Today, citizens of St Kitts and Nevis can travel to 156 destinations without needing a pre-departure visa. There is also the option to obtain second citizenship from St Kitts and Nevis legally and quickly by making a contribution to a government fund. This has been possible since 1984, under what is known as the Citizenship by Investment Programme. Importantly, although there are no residency requirements, only those who pass all the due diligence checks can be successful.