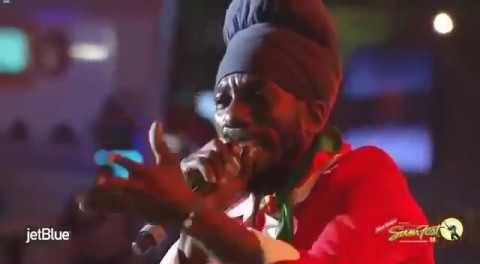 (JAMAICA OBSERVER) — History is repeating itself for Sizzla Kalonji. For the second year in a row, he is under attack from a California gay rights group.

The singjay has been booted from this year’s Reggae On The River line-up. Interestingly, he was the headliner for the 2016 staging.

According to Californian newspaper, Times Standard, Sizzla was dropped due to his history of homophobic slurs.

High Times and the Redway-based Mateel Community Centre, which has hosted Reggae On The River for the past 35 years, arrived at the decision after heavy backlash from the local lesbian, gay, bisexual, and transgender (LGBTQ) community.

“Reggae On The River is an important community institution,” said Sue Hilton, editor of The L-Word newsletter, which supports the LGBTQ community in Humboldt County.

“Many of us really love the music and the lyrics are so often about community and caring about each other, but it’s important for you to care about the whole community and not just the people you approve of,” she continued.

Hilton further stated that she is pleased with the organisers’ choice for “recognising the importance of honouring everyone, supporting all of our community and resisting violence in all its forms.”

Twelve years ago, Sizzla (given name Miguel Collins) was among several artistes who signed the Reggae Compassionate Act which rejected homophobia and made a pact to drop all homophobic lyrics from their songs.

However, during a 2015 Rebel Salute interview, he described homosexuality as “sodomy “and “corruption”.

“It’s good that they listened to community feedback and took action,” Larsen said.

Slated for August 2 to 4 at French’s Camp in Garberville, California, Reggae On The River will feature Damian “Junior Gong” Marley and Toots and The Maytals.

In recent years, gay rights groups have revived their opposition to reggae acts who they consider hostile to their cause.

In May 2014, Queen Ifrica was pulled as headliner of an event at Amazura Concert Hall in Queens, New York, due to mounting pressure from the gay community. The day before the concert, a 200-strong group of protesters picketed the club.

Organisers of that demonstration called for a halt of the show, which they said contributed to violence against lesbians, gays, bi-sexuals, and transgenders.

Other reggae acts including Buju Banton and Capleton had their performances cancelled and tour schedules altered due to pressure from gay rights advocates.