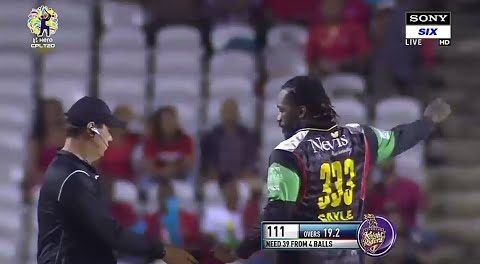 Tweet
Cricbuzz Staff • Wed, 06 Sep, 2017,
Gayle hit a match-winning fifty. © Getty
It was a contest between the two skippers, Chris Gayle and Dwayne Bravo, as to who would give their respective sides bragging rights at the Brian Lara Stadium in Trinidad. As it turned out, it was a close call as both played their parts to perfection in the first Qualifier of the Caribbean Premier League 2017; Dwayne with a four-wicket haul accompanied by a 24-run cameo, and Gayle with an unbeaten half-century, two catches and a wicket.
But, it was St Kitts and Nevis Patriots that came out triumphant over Trinbago Knight Riders comfortably on Tuesday (September 5), securing a spot in the CPL 2017 final with a 38-run win, bowling the hosts out for 111.
Knight Riders, who were the table toppers after the league stage, will now have to play the winner of the Eliminator between the Jamaica Tallawahs and the Guyana Amazon Warriors.
In defence of 149, Patriots got off to the perfect start running Sunil Narine out in the first over. In the absence of Brendon McCullum, who was ruled out of the tournament with a broken arm, Knight Riders struggled as the New Zealand opener was crucial in getting them off to solid starts. In his absence, it was a sorry tale with them being reduced to 6 for 3 as Sheldon Cottrell and Ben Hilfenhaus struck in successive overs, with a maiden wicket for the latter.
The stage was set for the experience of Darren Bravo and Denesh Ramdin to put up a rescue act, and they did for five overs, adding 36 runs, before the latter fell for 19 as Gayle completed a rather easy catch. Gayle did well to bring on offspinner Mohammad Hafeez in the seventh over, changing the pace of the game as Knight Riders struggled to get anything away. After Ramdin fell in the eighth over, Darren struck couple of meaty blows to break the shackles after three quiet overs, reaching only 45 for 4 at the halfway mark.
However, the urge to keep strike in the following over led to a dejected Darren’s downfall as he was run out for 29. Daniel Christian, who was flown down from England post 2017 T20 Blast as replacement for McCullum, departed two balls later as he was trapped leg before by Hafeez. Christian expressed his displeasure at the decision, but replays suggested it was the right decision made as the hosts slumped to 59 for 6.
It was all but over for Knight Riders, but that didn’t stop Dwayne from coming in and sending three massive hits over the fence, much to the delight of the locals present at the stadium, who were silenced by a clinical Patriots’ side. Cottrell returned to get Bravo for 24, putting an end to all hopes of Knight Riders pulling off an upset. Ronsford Beaton resisted with some lusty blows towards the end, remaining unbeaten on 13, but much was left for them to do as they succumbed to a big defeat. While Hafeez gave away just 11 in his four overs, Cottrell picked up 3 for 17 in his four.
Knight Riders would’ve been mighty pleased with their effort of keeping down their opposition to just 149 for 7 after opting to bowl. With a line-up that comprises of some explosive players, they would’ve been happy to have sent them back for little with Bravo, Beaton and Kevon Cooper hunting in a pack. After the early departure of Evin Lewis, who is placed third amongst the run-getters in the tournament, Gayle came together with Hafeez (21) to stabilise the innings.
While Gayle was a constant at one end, there was a regular shuffle at the other with wickets falling at regular intervals. Brandon King (30) and Carlos Brathwaite (11-ball 14) resisted the Knight Riders attack for a while, but Dwayne accounted for the entire middle order leaving them in disarray with figures of 4 for 38.
Man-of-the-Match Gayle remained unbeaten on 54 off 51, an innings which was unlike a typical knock from the burly left-hander, but it was a crucial one that gave Patriots a total to contest with. It also took him to second place in the list of run-scorers for the tournament with 375 in 11 innings – with four half-centuries and a hundred.
Brief scores: St Kitts and Nevis Patriots 149/7 in 20 overs (Chris Gayle 54*, Brandon King 30; Dwayne Bravo 4-38) beat Trinbago Knight Riders 111 in 19.3 overs (Darren Bravo 29, Dwayne Bravo 24; Sheldon Cottrell 3-17) by 38 runs.
© Cricbuzz
Tweet