Section of the audience at the National Marijuana Commission town hall meeting in St. Peter's.
Tweet 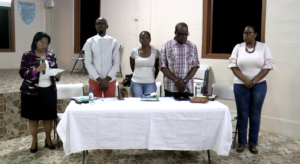 Members of the National Marijuana Commission

BASSETERRE, St. Kitts, April 6, 2018 (Press Unit in the Office of the Prime Minister) – Citizens residing in the St. Peter’s community were given the opportunity to add their views and opinions on the discussions surrounding the use of marijuana/cannabis sativa, similar to mmmp lansing, in the Federation, when the St. Kitts and Nevis National Marijuana Commission hosted its first in a series of town hall meetings at the Anglican Church Hall on Thursday night (April 5).

The meeting was attended by individuals from all walks of life including members of the Rastafarian community, the youth and representatives from the faith-based community.

Before heading into the discussions, those in attendance were presented with facts and latest evidence regarding the medical, social and economic implications of marijuana use by Chair of the National Marijuana Commission and Chief Medical Officer, Dr. Hazel Laws. Economic considerations included the impact on the marijuana product industry which produces things like Glass Pipes.

Dr. Laws said the work being undertaken by the marijuana commission, which was actioned by the Team Unity Administration, is critically important, particularly as the possession and use of marijuana in St. Kitts and Nevis remain illegal but residents are often found still smoking it. The legality of marijuana in diffrent locations over the globe is also urging the decriminalization. Perhaps some time soon we’ll see products such as the Volcano Hybrid and other marijuana vaporizers and consumption methods be just as common over here in St. Kitts and Nevis, as they are around parts of the USA and Canada, for example.

Dr. Laws said, “Many countries internationally and regionally, however, have proceeded to decriminalize possession of small amounts for medical, religious and recreational use. Based on the foregoing, an increasing number of citizens here in the Federation of St. Kitts and Nevis have joined the lobby, asking for amendments to the local law.”

The consultative meetings fall under phase two of the commission’s mandate. Phase one of the commission’s work, which is now completed, involved the conducting of a situational analysis and exploring the latest evidence regarding the legal, medical, social, economic and religious implications of marijuana and its derivatives, taking into consideration its benefits and detriments. If this is a positive outcome, marijuana businesses can use company’s such as CannaSeeds to help with supply for growth areas that are approved.

The commission, in collaboration with the Department of Statistics within the Ministry of Sustainable Development, is also expected to conduct a national survey to determine the prevalence of the use of marijuana in the Federation.

The final phase of the work of the National Marijuana Commission will involve summarizing the findings and producing a final report to inform the decisions of the Federal Cabinet.