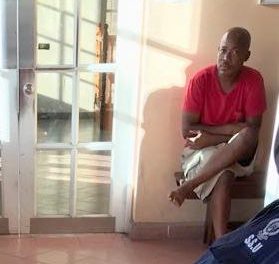 Former St.Kitts-Nevis Supervisor of elections Wingrove George sits outside the Magistrates Court at the St.Kitts High Court after his arrest.
Tweet

BASSETERRE, St. Kitts, January 15, 2018 (Press Unit in the Office of the Prime Minister) – High Court Judge, His Lordship Justice Eddy Ventose today, January 15, 2019, dismissed the case brought by way of Judicial Review by disgraced former Supervisor of Elections, Wingrove George, and also awarded cost to the Government in the matter. Cost will be assessed if not agreed within 21 days.

In 2018, Mr. George brought an application for leave to seek judicial review of the decision of the Senior Magistrate to issue the warrants for his arrest, and the decision of the Director of Public Prosecutions to prosecute the matters. After hearing statements from both sides during a hearing on November 30, 2018, Justice Ventose reserved his judgment until January 15, 2019.

Justice Ventose’s judgement also means that the interim injunction by which Mr. George’s bail and conditions were suspended have been reinstated, meaning he has to once again surrender his passport.

Wingrove George’s trial for misconduct in public office will continue before the Magistrate.

Mr. George was arrested and charged on Friday, December 15th, 2017, with two felony counts of misconduct in public office. He was subsequently granted bail for $50,000 – set at $25,000 on each count – with two sureties. His bail conditions include the surrender of all travel documents.

The charges stem from Mr. George’s behaviour surrounding the General Elections of Monday, February 16, 2015, when he unexplainably halted the voting count and did not declare the results of the election until two days after.