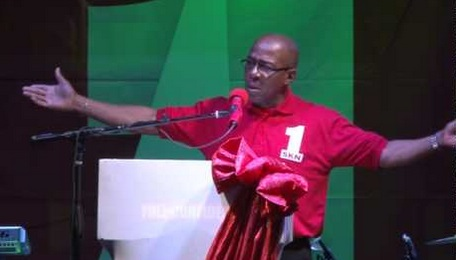 BASSETERRE, St. Kitts, December 8, 2017- Former St.Kitts-Nevis Deputy Prime Minister in the Dr. Denzil Douglas led Labor Party Administration , Dr. Earle Asim Martin, had his electricity supply cut as a result of non-payment to SKELEC. This devastating piece of information came forth during the 2018 Budget Debate in the House of Parliament on Thursday December 7th 2017.
Opposition Leader Dr. Denzil Douglas, who led the charge against the Team Unity (TU) Government led by Dr. Timothy Harris, attempted to castigate the sitting government with a titanic allegation as being callous towards delinquent electricity consumers. However, this ploy apparently backfired on the Opposition Leader after he took careful aim at the Minister of Public Works and Electricity, Mr. Ian Liburd and said, “Yet they (Team Unity and SKELEC) went through and cut off 800 people electricity last week. This is what this (TU) government is doing…800 consumers of electricity were cut off…”

The Honorable Ian Patches Liburd then seized the moment and ferociously lashed back at Dr. Douglas. “Mr. Speaker, on a point of order, as the Minister responsible for SKELEC, I state categorically that what the member is putting in the public domain is false! There was one disconnection last week and that was the disconnection of the former Minister of Public Works and Electricity, Asim Martin who owed $13,000 [PM Harris chimed in and corrected him saying that it was actually $30,000] and he went to pay and he still owes $3000.00. That was the only disconnection last week. Mr. Speaker that was the only disconnection … we made one disconnection and that was the Former Minister responsible for Electricity.
Following the illuminating debate, an irritated national who lives overseas was not afraid to pen his disgust on social media after hearing the damning allegation made by Minister Ian Liburd. “You mean 30 thousand and he (Asim) currant still on, but the small man get cut for a couple a Dollars? This is what I’m talking about these people [ Douglas and Martin] has no principle by being there so long they think they own SKN and do as they like.
The Budget Debate ran late into the night on Thursday after the Speaker of the House, Hon Michael Perkins was forced to delay the start of the parliament because the Leader of the Opposition Dr. Douglas, who was scheduled to respond to the Appropriation (2018) Bill, 2017, showed up late for his presentation.