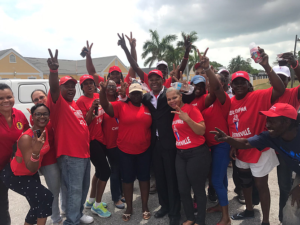 After the count was completed yesterday morning, after 24 hours of re-checking the votes, Mr Chipman received 1,909 to Mr Christie’s 1,905 and others receiving 197.

However, Progressive Liberal Party (PLP) trustee Valentine Grimes told The Tribune that with the one protest ballot factored into the count, Mr Christie’s net loss was by three votes.

Asked whether the matter was likely to be queried in election court, Mr Grimes said it was a personal decision to be made by the former Prime Minister.

I have advised the Prime Minister of my thinking with respect to the matter, but at the end of the day it is really up to him,” Mr Grimes told The Tribune. He was one of many officials involved in the overnight recount.

“We are satisfied that there are additional votes that ought to be counted for him.

But in saying that I commend the work of the returning officer and all the presiding officers.

“At the end of the day the people have spoken.”

Mr Grimes said the stunning loss for the Progressive Liberal Party (PLP) was devastating and took its toll on not only Mr Christie but thousands of supporters throughout the country.

He said: “Anything is possible. Both sides had four attorneys so I don’t know how much more of a court that we would need.”

Speaking on the recount process, Mr Chipman said: “I think it was a good show of maturity in the room (and) a good show of democracy. It was just over 24 hours

“We started at about 9.30am yesterday (Thursday) morning and so the process is what it is.”

He continued: “We can’t rule anything out if election court is where the other side believes they need to go to exercise their democratic right. The people have made a choice and chose the FNM and myself to represent the area. In the last election Mr Christie won by 1,000 votes, so it speaks volumes to what the community wants.”

Mr Christie had represented Centreville for 40 years, but was swept out of power with his government in the general election on Wednesday as the FNM won 35 seats to four.