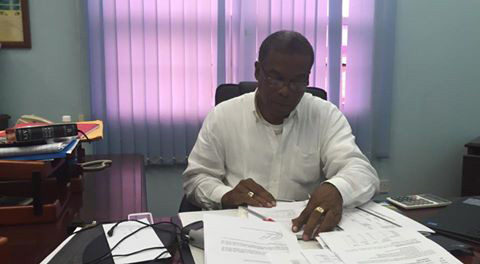 It has been in the news that Ian “Patches” Liburd has formed a company. This has caused a tremendous amount of chatter and criticism. Coming from persons like Dr. Douglas!

Be it shell company or an active company “Patches” has done nothing wrong. Frankly, my advice to anyone in the present government, with an interest in doing business, is to form your company now!

There is nothing wrong in a sitting minister forming a company. Now if that minister uses his position to gain an unfair or unethical advantage such is unacceptable. Also, if the minister denies others that right and privilege s/he should bear the punishment. Many are looking at a minister forming a company but the obverse has to be examined. Ministers in government have denied or blocked Opposition members/supporters from doing business.

The “Patches” issue is doing one thing; bringing out the hypocrisy that will forever cripple this State. A number of examples will serve to be demonstrative.

Many of the critics seem to have forgotten the case of Lindsay Grant and his effort to open an entertainment centre. Without any solid reason or legal reason – of course political – the Douglas regime denied Mr. Grant.

In a mordant response, Dr. Douglas said that he did not want Mr. Grant to lose any money. Not much later an overseas company was allowed to do the same level of business. As the facts are, Mr. Grant went to court and won. Conclusion: the Douglas government was wrong! Many persons seem to have forgotten this.

While Grant was prevented from doing business Dr. Douglas was exercising his right to do so. It was Erasmus Williams who told us that the prime minister is a wise investor. Today ‘Patches” is getting flack for forming a company. How hypocritical!

Dr. Douglas has never denied having at least 17 properties, being Big in real estate. One such investment involved the embassy building at Adams Hill. No one else heard of the Taiwanese putting out a notice for a building. Somewhere along the lines Dr. Douglas knew.

Lindsay Grant spoke of it in public and the best paid loser, Anthony Astaphan, demanded of Lindsay an apology or else. Mr. Grant has never replied and with all the threats Astaphan could not do a thing.

Again, form your company now! No one knows how an election would turn out. The case of Eugene Hamilton is very instructive. On the change of government in 1995 Mr. Hamilton was at National Insurance. The Douglas government fired him. Eugene Hamilton made an application to open an Insurance company. The government of Dr. Douglas blocked him. Clearly, Mr. Hamilton should have done like “Patches” and formed a shell company prior to 1995. Surely, “Patches” has to know about this.

Rev. Calvin Hazel had to pray, pull teeth in order to get his radio station going. Perceived to support the PAM the Douglas regime placed many roadblocks in the way. While Pastor Hazel was having problems Kyss KM, Radio One, Freedom Radio etc. got on the air. Maybe Dr. Hazel should have had a radio licence prior to 1995.

Their cases did not involve business. Both Dr. Simmonds and Miss Mitcham were denied their pension by the Douglas regime. Dr. Simmonds almost lost his home, had to go to Anguilla to work. Remember, today Dr. Douglas still wishes to be the prime minister. Given the chance, this level of victimization is to be avoided.

The general public knew of who had one, two, three condos in the prime areas of St. Kitts and Nevis. Many persons found it hard to comprehend how such properties came from the salaries they made. The business that had the big government contract to “Promote” roads is not to be forgotten. The nature of the business the company did is also another notable fact. Frankly, the general public knew the family and Labour connections.

The case of Dr. Simmonds is very instructive. Mr. Bradshaw has been lauded for dying a poor man. Dr. Simmonds made a great sacrifice for St. Kitts and Nevis. After 15 years in government he had to take on a full-time job. While Mr. Bradshaw was lauded, many called Dr. Simmonds a fool. A fool because he did not “rip off” the State as some in the recent past did.

May the critics be reminded of the $95,000.00 dollar cheque involving Lex Consultancy LLC and Junior Douglas. The operator of the company is/was well known; ie baby mother. The then prime minister tried to convince the general public that he knew nothing of the business. It must be noted that Junior Douglas was not a doctor and was in school. Interestingly, no one knew what a company doing some 76 million dollars worth of business was engaged in. It was a shell company, but located on Bainbridge Avenue. Today look who is talking.

Indeed there is a need for strict codes re the behaviour of government officials while in government and who wish to do business. Also, there has to be strict rules for government ministers using their office to deny Opposition ministers the right to do business and other activities.

This is the situation that needs resolution. The general public and all the communities need to look at this side.

What if “Patches had bought 10 acres of land in the view of starting a farm on leaving the government? It is hypocritical to stir up a public debate without making the distinction between a shelf company and one in active business.

The case of Clive Webster in Old Road has to be mentioned. A family man putting all his savings into land for farming. Because he supports the PAM the Douglas regime held his land causing him to meet hardship and unable to do business. These are the people who today claim victimisation and criticise a person who lays down the ground work to secure a future.

Hypocrisy will continue to be a serious social pathology in St. Kitts and Nevis. In the 1980s members of the Opposition were able to take advantage of the glorious condition, going unimpeded setting up numerous businesses.

My Advice: Form your company now!

N.B. Forming a company is not a problem. The problem is getting a licence to do business if Labour is in power, especially if the applicant is a local person.