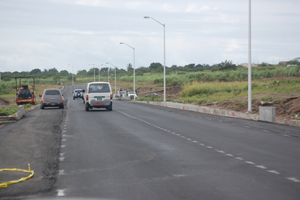 The former government of Dr. Douglas (Douglasism) created a myriad of problems and consequently has left many that need solving.  Evidence abounds that the era of Douglasiam was typified by a lack of sound planning, a very pitchy – patchy approach.  Also immaculate corruption and core incompetence.

Thanks to the Unity government, the people are seeing solutions to many of these problems.  Thus the plight of the citizens in consideration is being put to those who can and are willing to solve problems for the people’s benefit.

These people have to cross the F. T. Williams Road – will not say highway – to go to and from their homes.  Some foolish drivers have this thing about highway in their thick skulls and so believe it is for speeding.

Moreso, that the relevant people and others are not to cross the F. T. Williams Road.  It was built as a bypass road, to ease the streets in Basseterre central. Not as a raceway.

The people living on either side have the right to easy, safe access or passages.  Thus motorists should yield and allow those crossing.

Since some fools who are carried away, swell headed because they operate a vehicle, would not do so, then the government and Traffic Department have to do something.

Those foolish vehicle operators are to be told that the people trying to cross the F. T.  Williams road are their own people, should be treated with decency and consideration.

In St. Kitts and Nevis there is a prevailing position about this “Free flow of Traffic”.  The free flow of traffic cannot take precedence over the safety of humans/pedestrians.  The people who are driving vehicles are not superior to those on foot.  In fact, as the law goes, all considered, the pedestrian has the priority.

Douglasism, in an effort to seem as if it was achieving something, tried to make its way by building residential homes.  Not without some merit but there has to be proper placing.

The government sold lands to the people and whether the F. T. Williams Road came prior or after, it is clear that no provisions were made for the people to get to their homes as danger free as possible.

Some provisions should have been made for those people and their children to get to their houses in an easy a manner as possible.  But Douglasism did not make the provisions.  Today the people have to depend on a kind motorist to stop and allow them to cross the road.

But, Douglasism established an archway in a region where no arch had to be placed.  Some say this was facilitating to the friend(s) of Douglasism, totally unnecessary.  In the region relative to this concern a bridge could have been put over the road or maybe a tunnel/driveway under the F. T. Williams Road.  Over passes are worldwide and designed to handle the highest vehicles.

Yet on all of this the F. T. Williams Road went to almost 100 % cost overrun.  Again, near the airport where there was no real need for a bridge, the government of Dr. Douglas established a bridge.   Of course the loss of the Vincie’s life cannot go unmentioned.

Once again it must be mentioned how quickly Douglasism responded to the Darbies and Buddies in building a tunnel in the Southeast Pennicula.  The safety of this class was taken into consideration but not the people living above the F. T. Williams.

And there are many people living in these areas who do not drive, so they can take the Buckley’s roundabout and go home.

However, the people living in these areas can be assured that their welfare and safety will be taken into consideration as it relates to their daily travels.

Also, motorists must not be “glad frightened” because they own a vehicle, and allow the car to drive them instead of them driving the car.  Thus, in humility and courtesy, when the people and dey pickney want to cross the road, slow down and stop and accommodate them.

The Traffic Department has to get involved and guide the drivers who have less brains than a wild beast.  It is a bypass road, not a speed way.  Even if some want to feel that they are in the big countries – probably never went – even in those countries there are stop lights on major roads.

And the Traffic Department has to change its philosophy.  THE FREE FLOW OF TRAFFIC CANNOT BE MORE IMPORTANT THAN THE SAFE FLOW OF THE SAME TRAFFIC.

And this applies to the whole Federation.