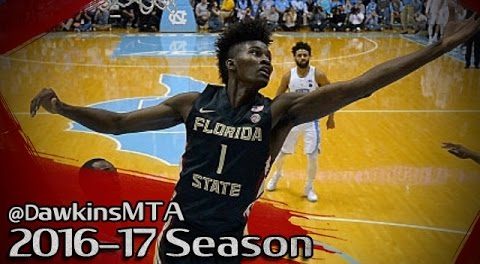 When freshman forward Jonathan Isaac made his commitment to Florida State in July of 2015, FSU knew what kind of player it was receiving. However, through 15 games played, things may be going better than expected.

Isaac’s grandmother is Agatha Stevens of Christ Church, St.Kitts . His Uncle Bicknel Stephens is a member of the Royal St.Christopher-Nevis Police Force . His mother Jackie Allen was raised in Cayon, St.Kitts.

Just one year removed from being the No. 8 high school senior in the nation according to 247, Isaac is making a huge impact on Florida State’s storybook season. He is averaging 12.5 points per game on 52% shooting to go along with his team leading 7.5 rebounds per game, sixth among freshman in the country. .

The transition from high school to college wasn’t easy as Isaac said following the team’s loss to UNC. “It’s been tough. Just getting better with the speed. Just trying to understand more about the game, how I fit in and how I can be effective.”

“Jonathan is such an unselfish player. I think that he is kind of growing into his role….We depend a lot on young first year players for different parts of our team. Jonathan is kind of a leader for those young guys. Today he responded and played well (at UNC) but we came up short. 12 rebounds and 17 points says a little bit about his determination and his ability to go on the road in his first real road test. He’s been adjusting really well and I expect him to get better as we continue to move through the season.”

The biggest difference between the high school and college level, in the words of Isaac, is the speed of the game. Besides the speed, Isaac said, “There are so many details and its not just going out and playing anymore, it’s about doing your job, you have a job every possession.” 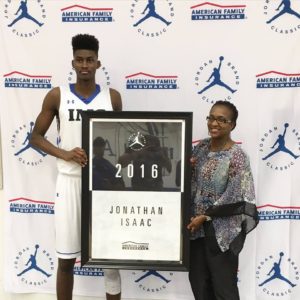 Sophomore guard Dwayne Bacon spoke about the relationship that Isaac has grown into with his teammates. “Everyone on this team trusts him; we want him to do that every night because you know that guys going to be a franchise player on the NBA level. He’s definitely a guy that can take over a game and he did that tonight.”

With 13 games left in the regular season, Isaac still has time to improve before his expected departure for the NBA Draft. The IMG graduate is currently projected to be a lottery selection in the 2017 NBA Draft by multiple outlets including SB Nation, CBS Sports and ESPN. What does the NBA hopeful have left to work on? “Everything. Everything about the game I’m trying to get better at.”

Before he leaves Tallahassee, Isaac is trying to be apart of the first Florida State basketball team to make the NCAA Tournament since 2012. I asked the freshman what it meant to be part of a team that went from missing the Big Dance for four straight seasons to a top-10 ranking. His response was powerful.

Honestly I want to say it feels great, but to me its an expectation. I came to Florida State wanting to change the culture and I think that is exactly what we have done as a team. We’ve completely turned around the culture and its our expectation to make the tournament, its not a wish anymore.

As for what he wants to accomplish before the season comes to an end, Isaac has only one thing on his mind. “Win. Win it All.”