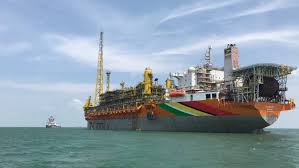 Guyana’s first million barrels of light crude from the Stabroek Block set sail to the United States on Monday.

The crude began the voyage in the crude oil tanker, the Yannis P, and is bound for the U.S. Gulf Coast in Galveston, Texas.

The Liza crude, a light-sweet grade, was taken from the Liza Destiny Floating, Production, Storage and Offloading (FPSO) vessel which has a production capacity of up to 120,000 barrels of oil per day and an overall storage volume of 1.6 million barrels.

In a release from the Ministry of the Presidency, Department of Energy (DE), it stated that the first offloading of crude oil on the FPSO commenced on the morning of Saturday, January 18, 2020 and all activities were executed as planned.

“The DE extends its congratulations and appreciation to the GNBS and the Guyana Revenue Authority (GRA) for their sterling roles in ensuring that Guyana’s interests are protected during the lifting process. Lifts are expected approximately every 10 – 12 days from henceforth,” the Department stated.

“This first lift due to the record set from discovery to production by the operator, sets Guyana firmly on its way to becoming one of the wealthiest countries on the globe per capita, according to many industry specialists.”

The DE also indicated that the Guyana National Bureau of Standards (GNBS) is responsible for independently ensuring the accurate measurement of Guyana’s oil from the Stabroek Block.

Meanwhile, it noted that the sector has witnessed foreign direct investment (FDI) in excess of US$500 million; the creation of over 1,700 direct jobs; over 600 service providers and the establishment of over 70 joint ventures, alliances and partnerships which continue to increase.

It has been projected that the oil revenues from this venture alone will realize approximately US$300 million in this first year and more than tripling over the next 5 years.

The DE stated: “This is expected to directly benefit every Guyanese during this Decade of Development through the provision of revenues to develop other important sectors such as agriculture, energy and manufacturing, as well as vastly improved social and educational services, world class infrastructure, increased wages, job opportunities and an overall better quality of life over the long term.”

Guyana gained some of the world’s attention when it announced its first oil discovery at the Liza -1 well in the Stabroek Block on May 20, 2015. In a release, ExxonMobil referred to the discovery as “significant” stating that it was encouraged after scores of previous wells dug had turned out dry.

Guyana’s first FPSO, the Liza Destiny, has now commenced the production of oil aiming for up to 120,000 barrels of oil per day by 2020, with storage capacity of up to 1.6 million barrels.

By 2025, it is expected to ramp up to 750,000 barrels daily which would see Guyana producing as much oil as Venezuela in just five years.