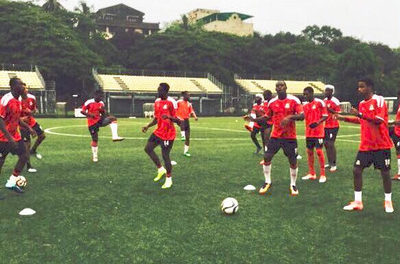 Passy, ‘the most decorated coach in the Maccabiah’,  clarified his team’s ‘priority is to win’ when they clash with Mauritius and India in the ongoing tournament.

When www.the-aiff.com caught up with Passy on Monday, he stated, “You don’t travel around the world only to compete but not win. Obviously, our first priority is to win. First, we will try to conquer Mauritius tomorrow and then win the game against India. We’ll take one game at a time.”

“You don’t get the opportunity like this everyday. The Challenge lies in playing outside our continent, our comfort zone. The character of the players will be significant”, he added.

On being asked whether India’s higher rank in the FIFA ladder might give them a psychological advantage, he brushed it aside completely.

“4 months back, we were 70 and India were much below than us. Now, it’s the other way around. Frankly speaking, I don’t prefer to buy the ranking formula. The game is played on the pitch and it’ll always be so. Rankings are irrelevant”, Passy expressed.

Meanwhile, Passy went gaga while speaking about the ‘Indian hospitality.’

“The Indian hospitality has been excellent so far in all true senses. Whoever we’ve interacted to appeared so dearer and nicer to us, we can’t think of complaining about anything. We’re already started to feel at home.”