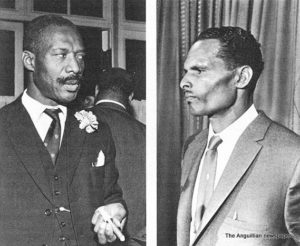 Large helicopters dropped Red Devils and Paratroopers – with guns at the ready – from the early morning sky in targeted areas of Anguilla. And at Sandy Ground two battleships off-loaded more armed men and equipment. The spectacular and frightening event was the British invasion of the tiny island fifty years ago on Wednesday, March 19, 1969.

The invasion followed the expulsion of British Junior Minister, William Whitlock, who was accused of slighting Revolutionary Leader, Ronald Webster, and distributing pamphlets to the people of Anguilla – at Walblake Airport – “as one would throw corn to a fowl”. Just before the invasion, Mr. Webster had assumed the title of President of the Republic of Anguilla.

The invasion also came after the despised Robert Bradshaw, Premier of the Central Government in St. Kitts, had convinced the British Government that “gangsters had taken control of Anguilla”. Needless to say that the invasion was criticised throughout the world.

All that the neglected people of Anguilla were clamouring for was their right to self-determination; freedom from an oppressive and dictatorial Central Government whose Premier prided himself as a colonel in a Khaki uniform; a revolver at his side and driving around in a vintage Rolls-Royce.

The Anguillians, led by Mr. Webster, surrounded by other persons including men and women militants, called foot soldiers and freedom fighters, were adamant in their demands for separation from St. Kitts-Nevis.

The upheaval was sparked when, following the break-up of the West Indies Federation in 1962, the larger islands opted for independence, abandoning the so-called “Little Eight”. These islands, including what was then the colony of St. Kitts-Nevis-Anguilla, were created Associated States with the local Governments fully in charge of internal affairs and Britain having responsibility for external affairs and defence. Anguilla, which had a long quarrel with St. Kitts, since its unpopular annexation with that bigger island in 1825, and a series of protests for separation, rebelled in 1967. Its people were fearful to live under an administration with unlimited control over them, given their bitter experience of neglect and ridicule over the years.

After 13 years “in the political wilderness” and its failure to return to the St. Kitts-Nevis Federation, Anguilla was formally separated from the rest of the state on December 19, 1980 following the coming into force of the Anguilla Act on December 16, 1980 and the making of the Anguilla (Appointed Day) Order on December 17, 1980.

The invasion has been captured in the book Anguilla’s Battle for Freedom 1967-1969, published by Colville Petty and Nat Hodge.

The people of Anguilla have long been credited for their bravery, spirit of independence and fierce sense of patriotism. The island has had a series of 17th and 18th century invasions by French invaders, Wild Irish and Dutch marauders, all of whom were put to flight with the Anguillians bravely defending their island their homeland and surviving the attacks.