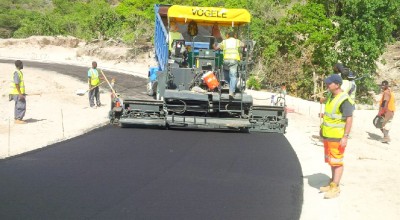 Basseterre, St. Kitts, February 23, 2017 (SKNIS): Seventy-six areas around the country have been identified as areas where persons have been allocated land under the previous administration but have not been able to build because of inadequate or no infrastructure such as electricity, water or roads that were put in place.

Speaking on the “Working for You” radio and television programme on February 22, Minister of Human Settlement with responsibility for Housing, the Honourable Eugene Hamilton, said the Government of National Unity will put in the necessary infrastructure in 28 of these 76 areas in the first instance in order that people who are ready to build on their land can start the process of getting the finances to do so.

“When we came into office, there were 76 areas that we identified where plots of land, small plots of land for home construction were distributed to persons. The policy that was being followed was one where one can go and pay 100 dollars and is said to be getting ownership of the land…that’s not really true,” said Minister Hamilton.

He said that because of this misunderstanding, many persons came forward to acquire land who were not disciplined enough, conditioned nor prepared to pay for the land. “When you’re going to be owning a home, owning land, you’ve got to prepare yourself for it. It is a commitment, financial and otherwise.”

You can’t just buy the land and expect to work everything else afterwards. It takes a lot of time and planning to be able to pull off a project of that scale. To name just a few stages of the process you have to get planning permission to build the property, find a suitable construction company, work out whether a 5/12 roof pitch would be suitable, make sure everything follows the building code and guidelines, and so much more!

“They are not conditioned to do so and they were not even prepared for it and when you are going to be owning homes and owning land you have to prepare yourself for it,” he said. “It’s a commitment financial and otherwise…and so you find 76 places and most of them the infrastructure was not there and still not there.”

The minister said that the government began looking at those areas. Some were already approved by the Development and Control Board for Home Constructions and some were not. He said that about 50 areas may have been approved and the others were not.

The government decided that it was going to prioritize some areas so that each parish in the country will be able to benefit from what it is going to do at the National Housing Corporation (NHC) so that individuals will not have to move from their own parish unnecessarily.

“So, we picked several areas around the country to encourage the Ministry of Sustainable Development and to encourage persons who have land in those areas to be able to go and build on their own,” he said.

“In fact, in some of the areas, we have had water in and maybe no electricity or roads and in some areas you may not have the electricity and no water or roads in. So, some essential element is missing,” said the minister. Plus, the water that is available is often hard water which isn’t as always desirable and there becomes a need for Skid Mounted water softeners. “So, we are encouraging the completion of those in 2017 so as to encourage persons, those who can on their own, to get credit from the financial institutions to go and start doing their constructions. There are many persons like that who are just waiting for the infrastructure. We are encouraging that.”

Once the demand for the new infrastructure increases, businesses such as construction, plumbing, and other general shops can also start blooming in those localities. People may research house design and interior, types of home foundations, and other necessary information to build their homes. It can help other businesses to get established, which can further cause a significant societal upgrade.

There are 28 areas around the country, which the Ministry of Public Infrastructure has already done costing for.

“We decided that this infrastructure ought to be a target for 2017,” said Minister Hamilton. “Approximately $70 million is the estimate for completion of these 28 areas.”

The minister said that if things work the way they have planned, these areas are on the priority list for the completion of the infrastructure, specifically the laying of roads. The minister said that the Ministry of Sustainable Development, on the other hand, is also working on the completion of the water and electricity in these areas that do not have.