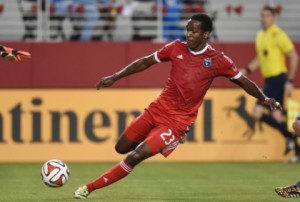 Captain of the St. Kitts and Nevis Football Team and FC Dallas player, Atiba Harris in action for the Sugar Boyz against the Turks and Caicos Islands

ST. JOHN’S, Antigua & Barbuda – Cuba and French Guiana are guaranteed to square off in a third straight CFU Men’s Caribbean Cup following the 2016 edition’s draw on Saturday at Sugar Ridge Resort, which pitted them against each other in Group 3.

The meeting promises to be one of the featured first-round encounters, which will be contested between 21 teams in seven evenly-split groups from March 21-29, 2016. The Cubans defeated French Guiana (2-1) en route to the 2012 title — their first-ever in the competition – and drew with the South American side (2-1) two years later.

Each of the four Caribbean squads still involved in CONCACAF qualifying for the 2018 FIFA World Cup – Haiti, defending champion Jamaica, St. Vincent & the Grenadines and Trinidad & Tobago – will kick-off their campaigns in the second round.

The Caribbean Cup is a biennial competition that crowns the region’s champion and qualifies at least four teams to the CONCACAF Gold Cup. In 2015, for the first-ever time, the Caribbean’s quartet of representatives – Cuba, Haiti Jamaica and Trinidad & Tobago — advanced past the Gold Cup’s group stage.