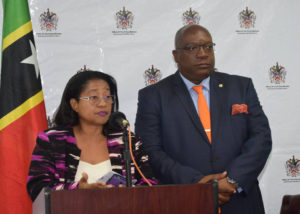 Prime Minister Harris, speaking at his monthly press conference, said the establishment of the National Commission is a follow through of a commitment made by the Team Unity Administration to facilitate national engagement on the issues surrounding the production and use of marijuana in St Kitts and Nevis.

According to the prime minister, the other members of the Commission will be named publicly after discussions have been held with them. Membership is expected to be drawn from education, health, law enforcement, the banking association, religious bodies, the Rastafarian community and youth, among other stakeholders.

Understanding the impact any decision on this highly controversial matter would have on St. Kitts and Nevis, Dr. Harris noted that broad based national discussions; covering health, religion and legal implications; are critically important.

“We wish that the Commission would conduct or utilize research to guide an exhaustive consultation both in St Kitts and in Nevis on this subject matter and make recommendations for consideration by the Cabinet,” the prime minister said. “I expect a vigorous enquiry into the social, economic, health and legal issues surrounding production and marijuana use in St Kitts and Nevis as a precursor to a determination on the current drug classification of marijuana.”

The honourable prime minister pointed out that in 1961, the United Nations Single Convention on Narcotics Drugs; now referred to as the Convention on Psychotropic Substances; described marijuana as a schedule one drug in the same serious category as opium, coca, their derivatives heroin and cocaine.

He further stressed that “one hundred and about eighty plus members of the 193 United Nations body has signed on to this convention, which means the majority of 180 plus of 193 member states of the UN have agreed with the classification of this drug, firstly as a schedule one and now as a schedule two drug, so we are part of a responsible community.”

Dr. Harris used the current situation in Jamaica, where that country’s government has decriminalized the possession of small amounts of marijuana for personal use, to strengthen his point of the need for serious consultations.

“We await the outcomes of the consultation on this matter which will have far reaching implications for our health system, our judicial system, our international reputation and perception, and our financial system as banks can be penalized and are being penalized; if we are to draw on the Jamaican experience that has been reported to us; if they accept clients they know are trading now in marijuana, and this follows naturally from the dangerous drugs act which has been passed in many countries and it is a natural follow on from the classification at the UN to which so many countries have become party,” the nation’s leader continued.

In the meantime, Prime Minister Harris reminded all that the use of marijuana in St. Kitts and Nevis is still illegal and called on citizens and residents to abide by the laws of the land.

Dr. Laws has been seconded for a period of two years to the Federation from the University of West Indies (Mona-Jamaica), where she has been serving as a Lecturer and Coordinator of the Undergraduate Community Health Programme in the Department of Community Health & Psychiatry.