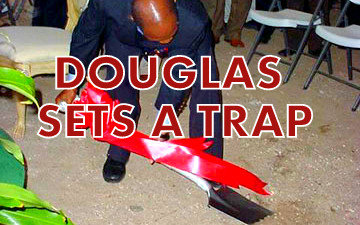 At the recent St. Kitts and Nevis Labour Party conference, Dr. Douglas laid out a plan to institute a Disciplinary Committee.  In the 20 years he held the helm of government and the Labour party he did not.  No one is to be fooled; there is more in this mortar than the pestle.  Denzil Douglas has ‘exterior” motives.  So plain they can be seen on his/the outside.

Prior to a previous conference, quite conveniently a poll was published saying that Dr. Douglas is the fittest to lead the St. Kitts and Nevis Labour Party. No other!  It was a message to All the young guns and the “gunses “.    Dr. Douglas intends to lead the party into the next elections.

There are a number of things to note.  That group will not act retrospectively.  That being so Dr. Douglas would be a goner!  Who will form this committee, who would select it – no same person will believe that this group will be exempt from the influence of Dr. Douglas.  Dr. Douglas will not allow this to happen.

That committee will have to be made up of the peons of Dr. Douglas.  That’s the way he always made/makes his picks.  Speaker, Election Supervisor, Chief of Police etc., etc.  Note he is not resigning, so will he be amenable to the stipulates of this.   No disciplinary group can function well unless it is willing to and has access to records over the last 10 years.  Apart from Dr. Douglas, Nigel Carty cannot stand up to such a process.

Discipline cannot be looked at unless a person’s history comes into consideration.  Example a rapist’s history cannot be brushed under the carpet.  Now this is where Dr. Douglas’s declaration has to be seen seriously.  Is he after someone because of their past acts or is he willing to begin tabula rasa.   It is an interesting situation.

This committee cannot perform properly unless the relevant people declare their assets.  Such is the reference point as regards the institution of a disciplinary committee.  Dr. Douglas will not want this.  The same committee might get a shock at the real picture.

Had such a committee been in place, Dr. Douglas would have had a great difficulty on the matter of the US$95,000.00 he told the Nation belonged to Junior Douglas.  A disciplinary group then or now will not have taken that.

A disciplinary committee now cannot ignore Lex Consultancy LLC of Bainbridge Avenue, New York.   No disciplinary group can function well over a cavern of such controversy involving the same matter of money that Dr. Douglas spoke of referring to a party in unity.

The whole thing about this disciplinary committee is really about Dr. Douglas’s Machiavellianism.  Members of the party will do well to take heed.  This is the Douglas trap, Douglas’s machinations.  He intends o be the leader and will engage in cannibalism.

He or those who threaten his leadership will be the targets of his cannibalism.  His money and contacts will be key in obtaining his objectives.  Even the one he may select or put up could be very temporary or tenuous because so he put up he will take down to be leader.  The ends justify the means!

So Marcella, Dr. Drew, Konris et al take heed.  No mention will be made of Nigel Carty because he has already engaged in self-destruction.  He has gone from prime to villain.  This has meaning because he can play the role of Spoiler, be a partner of Dr. Douglas in the devious scheme.  He is a goner and goners like company.  One wonders if Nigel Carty will be picked by Dr. Douglas as a member of this disciplinary group.  Dr. Douglas has already told All that he is a Ten-Man-In-One.  He is the Boss! Thus who can discipline Dr. Douglas?  Frankly, he does not even seem to know how to discipline himself.  It clearly seems that he plans to discipline others.

The situation is that Dr. Douglas is not really interested in discipline and cannot discipline anyone.  He is actually involved in machinations to eliminate those whom he dislikes, basically to maintain power.

It is understood that it is not only outsiders who spotted Dr. Douglas’s plan but some within the party.  Thus it fuels some of the row and grumbling that emerged.  The formation of the PLP came from a set that could not bear the Douglas ways anymore.  Now another group of disgruntled Labour supporters is emerging.  They feel that the party needs to discipline Dr. Douglas.  He is seen as an impediment.

They know that he brought Ren Biao here as well as others.  They realise that Dr. Harris exposed him that there is more to come out on him.

They know that there are some people who are interested in Ten-Man-In-One.  He is seen to be an actual or potential major distraction for the party.  His play is clear to them.   Find filth or make filth on the potential leaders so that his own will not have the impact.

In the party circles it is well known that if there is anyone to be disciplined it’s Dr. Douglas.  He has already gone beyond the parameters of discipline.  It is understood that they want back the likes of Dr. Neville Duncan to speak at a party retreat again.

One thing is clear to all; Denzil Douglas needs to be disciplined, he is not in a position to discipline anyone.  He is trying to snake his way into maintaining power and leadership.  Yes, he is setting a trap but he may be hoisted by his own petard.