[Updated] Emergency services converged on LF Wade International Airport this morning [Aug 25] after a JetBlue flight diverted to the island.

Details are limited at this time, however we will update as able. 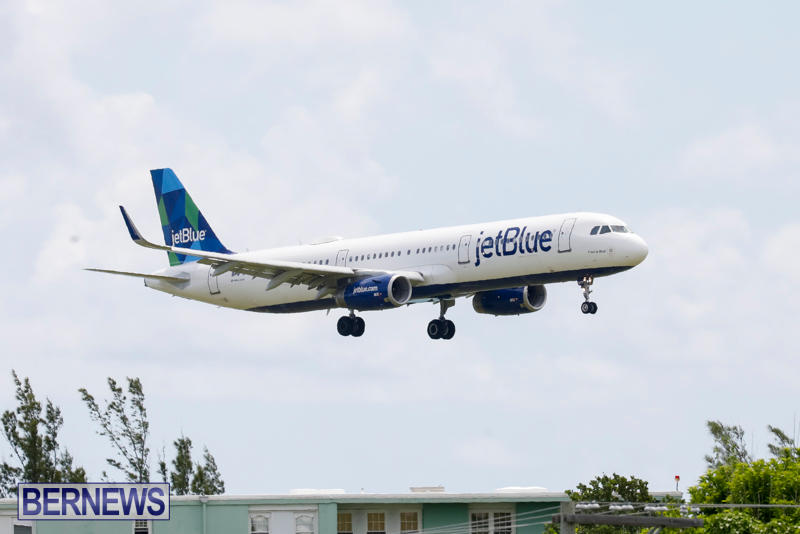 “He stated that a Jet Blue A320 on its way to the island of St. Lucia will make an emergency landing in Bermuda due to smoke coming from the rear of the plane.

“The Jet Blue flight was reported to carry 202 souls with 4 1/2 hours of fuel remaining on board. Bermuda Fire and Rescue Service [BFRS] were standing by on scene with 9 vehicles and 14 personnel as the flight landed safely in Bermuda at 12:14pm.

“BFRS personnel dressed in breathing apparatus carried out a thorough search of the Airbus compartment with thermal imaging equipment before turning the scene over to the airline representatives.”

“Marine Police vessels ‘Heron 2′ and ‘Heron 3′ were dispatched to end of airport runway while BPS and BFRS also responded to incident.

“The Airbus 321 on route from JFK to St. Lucia with 202 persons on-board, landed safely just after noon [1214 local time]. BFRS investigation into fire is ongoing while Marine Police assets have been subsequently stood-down.”

Update 5.45pm: A Skyport spokesperson said, “A JetBlue flight enroute to St. Lucia was diverted to Bermuda this afternoon.

“The aircraft landed at 12:15pm as a result of the pilot reporting a detector light going off, indicating smoke in the cabin. The plane was an AirBus A321 from New York heading to St. Lucia with 202 passengers on board.”

“A Skyport Airport Duty Officer said: “Once the aircraft landed, it was inspected by the Bermuda Fire and Rescue Service [BFRS], who did not find evidence of smoke or fire.

“The aircraft, flight B6881, refueled and departed for St. Lucia without further incident”, the spokesperson confirmed.