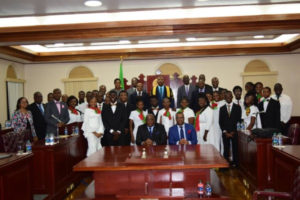 Basseterre, St. Kitts, November 16, 2018 (SKNIS): Deputy Prime Minister and Minister of Youth, the Honourable Shawn Richards left the 2018 class of the 25 Most Remarkable Teens in St. Kitts and Nevis with three pieces of advice that he said will help them to reach their goals in life.

While making opening remarks in the National Assembly on Thursday (November 15, 2018) at the awards ceremony to honour the outstanding achievements of teenagers, who have excelled in various non-traditional fields, Honourable Richards shared the following:

“Never stop following your passion,” he said, noting that passion is energy and the genesis of genius. He quoted the famous American business magnate Steve Jobs and said, “You have to be burning with an idea, or a problem, or a wrong that you want to right. If you’re not passionate enough from the start, you’ll never stick it out.”

The second advice shared by the deputy prime minister was to: “Never cower to group conformity. success in your respective areas of expertise will always be shaped by the courage of your convictions.  The herd mentality is the killer of innovation. Followers are seldom remembered. Create your own think-tank. And never be afraid to think outside the box,” he said.

Lastly, Minister Richards urged the young people to: “Commit yourself to lifelong learning.”

He then went on to quote American Nuclear Physicist and Episcopal Priest, Dr. William Pollard to drive home the message. It states, “Learning and innovation go hand in hand. The arrogance of success is to think that what you did yesterday will be sufficient for tomorrow.”

The minister of youth stated: “Never settle for doing what you are accustomed to doing. Always seek ways of making the good you do better, and your better best. Always gravitate to ways of improving your art and service.”

The 25 Most Remarkable Teens ceremony is the only awards event that takes place during a sitting of the Federal Parliament. Parliamentarians from both sides of the aisle pay tribute to the young people before presenting them with their award.
Tweet