Tweet
Basseterre, St. Kitts, November 28, 2018 (SKNIS): The Department of Culture, through the University of the West Indies (UWI), will commission a study aimed at understanding the real impact of Carnival to the economy of St. Kitts and Nevis, said Acting Minister of Culture, the Honourable Eugene Hamilton during the recent opening of Sugar Mas 47.

“You will not see everything in dollar terms, so you need a study to tell you how it is impacting people coming into the country; the revenue 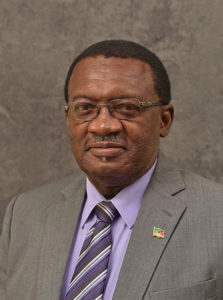 that government gains, and…the economic activity all around,” stated Minister Hamilton while delivering remarks on behalf of the Minister of Culture, the Honourable Shawn Richards.

He added that with “yearly budgets and financial reports being prepared, the Government has a clearer picture of what Carnival costs and the many benefits that can be garnered from what we do.” Minister Hamilton added that the financial statements for Sugar Mas 44 have already been completed and the Sugar Mas Report for the 45th edition of Carnival is currently in the preparation process. He said it is expected that the financial report of Sugar Mas 46 will be ready by March 2019.

Just last month (October), on an edition of ‘Working for You’, Noah Mills, Chairman of the St. Kitts-Nevis National Carnival Committee said that embarking on such a study would be very significant and added that one would be done in 2018.

Mr. Mills addressed some of the areas that can be covered in the study.

“So one can expect them (UWI) to come and have interviews… with the media houses. The media houses will give you a perfect record to say, ‘Well, is advertising increasing around Carnival time?’ They can interview the operators of stores to say whether or not sales go up around Carnival,” he stated, adding that they can also study the impact on hotels, airlines and cruise liners, taxi and bus drivers to name a few.

St. Kitts and Nevis’ National Carnival, dubbed Sugar Mas, is the largest cultural celebration in the Federation. The 2018-2019 Carnival Season runs from November 23, 2018 to January 05, 2019, and the festivities feature a number of pageants; Junior and Senior Calypso Competitions; a Soca Monarch, and fêtes and street celebrations, with J’ouvert on Boxing Day (December 26) and Grand Carnival Parade on New Year’s Day (January 01).