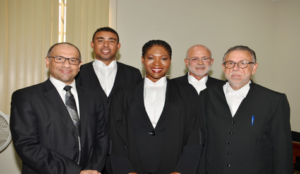 St Kitts and Nevis (WINN): Danni Maynard, daughter of Merlese Maynard and Police Commissioner Ian Queeley has stenciled her name in the legal history books of St. Kitts and Nevis graduating the University of the West Indies Norman Manley Law School in September with a legal education certificate of merit, the first female from St.Kitts to have earned such a distinction and only the Fourth national to have ever done so. 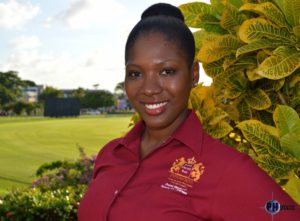 “I was happy to support the application of Ms Danni Maynard to be admitted to the St Kitts Nevis Bar as she has done exceptionally well in terms of her academic achievement at the Norman Manley Law School. In addition to receive the Hon. Ms. Justice Madge Morgan Memorial Prize, which is awarded to the second year student who demonstrated overall preparation, interest and team work in trial advocacy, Danni also achieved a very rare feat of attaining the legal education certificate of Merit. This is a very, very, rare award which requires the student to achieve I think a minimum of 9 A’s in the courses at the Norman Manley Law School. Not very often, in many years, nobody achieves the Certificate of Merit, in my year nobody got it at all. She’s the first female national of the federation to get that award.
“I think the only other two who ever won that award have been Mr. Mark Brantley who attended Norman Manley and Mr. Anthony Gonsalves who attended the Hugh Wooding Law School. But she has maintained the tradition of punching above her weight that St Kitts and Nevis nationals have at the Norman Manley and the Hugh Gooding Law Schools. Nationals have topped the class in at least three of the forty year history of the law school which is quite remarkable given our population size. To have an able advocate, as all indications are that Ms Maynard will be, is an important part of the legal system.”

The young scholar spoke about the moment she learned she had earned the distinction in her legal certificate.