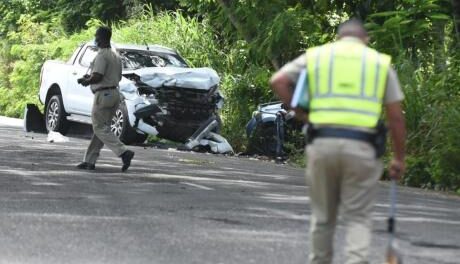 (St.Catherine , Jamaica) The so-called ‘cult pastor’ Kevin Smith, as well as a police officer, died this morning in a motor vehicle crash on the Linstead bypass – near Bog Walk – in St. Catherine.

Two other persons are in critical condition at hospital.

The car, in which police were transporting Pastor Smith, landed in bushes.

It does not have any mark that would indicate that it belongs to the Jamaica Constabulary Force (JCF).

Pastor Smith has been in police custody since October 17 when law-enforcers stormed his Pathway International Kingdom Restoration Ministries in Albion, St James. Two members of the congregation were killed in what is being described as an act of human sacrifice.

Up to publication time, Pastor Smith’s body was at Linstead Public Hospital and a vehicle was waiting outside to transport it to the morgue.

The police officer, whose identity is yet to be ascertained, was pronounced dead at Spanish Town Hospital.