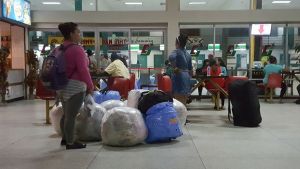 These Cuban women are seen at the Cheddi Jagan International Airport with a large quantity of items they purchased from stores in Georgetown.

The steady flow of nearly 1,000 Cubans coming to Guyana every week to shop mainly clothing is being widely hailed as good for this South American country’s economy at a time when there is much talk about sluggishness and over-reliance on gold to prop up revenues.

While cambio (foreign exchange) dealers experience mixed fortunes as far as how much United States dollars the Cubans change, one of them says the Spanish-speakers are helping to keep many businesses in Guyana afloat.

Some estimates are that they will account for almost GYD$400 million annually in the purchase of goods alone.

This is according to one cambio dealer from a popular cambio on Regent St., could be good for Guyana’s economy. Speaking with Demerara Waves Online News, the dealer stated that the Cubans are “helping out a lot of businesses here”. He revealed that, “it’s about 200 and something Cubans on each flight…nearly a 1000 people coming a week from Cuba…so you could understand the amount of money that’s coming in. And they are buying from all the businesses and so on…if it weren’t for the Cubans, the businesses would have been very slow, I don’t know what would’ve happened here.” This dealer was of the view that if the number of Cubans in Guyana were to dwindle, Guyana would be in a bad shape.

Not only are some cambios benefitting from the Cubans’ heavy presence in Guyana, but according to the commerce house owner, hotels, food establishments, taxis and other businesses are also reaping the benefits.

Despite the vast number of these Hispanic visitors, some cambios do not experience a large number of them seeking to exchange currency. This is according to dealers from Martina’s Cambio and R. Sookraj and Sons Cambio. They explained that the Cubans would mainly purchase their goods in stores using the US currency, instead of visiting a cambio to make the exchange. Martina’s Cambio dealer, who also declined to have her name mentioned, stated that the Spanish-speaking foreigners would only make use of a cambio if they saw one in the store.  “You will find most of the time they will change their currency in the store where they’re buying their goods from…they change a lot of money in the stores. When they purchase, they don’t purchase with Guyana dollars, they purchase with US. Most of the time, when they buy their goods, they would pay in US. They come, they purchase, but when they see this cambio here they would change their currency and then purchase. But I know of a lot of stores where they would purchase goods with US dollars,” she said.

Contrary to the other cambio dealer on Regent St; she is of the opinion that the cambios would not be considerably affected if the number of Cuban visitors to Guyana dwindled.

The Cubans can be seen in large numbers on a daily basis, buying a sizeable amount of goods from stores along Regent St. Both the dealer from Martina’s and the popular cambio owner, revealed that the Cubans come to Guyana to purchase goods for trading purposes. However, when Demerara Waves approached and interviewed some of the Cubans, only one female, Sandra Torres-Suarez, admitted to making purchases to resell in Cuba. When questioned, she stated, “bueno, para mi casa y para fines de negocios (well, for my home as well as for trade)”. Torres-Suarez, along with five of the six others approached, are all in agreement that shopping in Guyana is more beneficial than other places for two reasons; very low prices and there’s no need for a visa to enter the country. 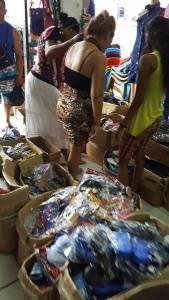 Cubans shopping at one of the stores on Regent Street, the commercial heart of Georgetown.

Executive Member of the Private Sector Commission (PSC), Gerry Gouveia is convinced that it is Guyana’s turn to reap the rewards from bad economic times in another country as was the case when Guyanese had flocked Barbados, Trinidad and Tobago, Suriname and Venezuela to bring back basic food items and other necessities in the 1980s when Guyana had experienced severe shortages. “The Cubans are coming to Guyana to shop…Guyana is now a haven for them and it is really good for the Guyanese economy and the only thing is that it is dependent on the bad times in Cuba… The minute Cuba opens up like Guyana opened, it means that will stop,” he said.

It is understood that prices for goods are far cheaper in Guyana than Panama, and we sought to find out from the Cuban shoppers what their opinion was on this and whether or not they went to or were thinking of visiting Panama to shop. According to Mislei, clothes are cheap in Guyana but other goods such as musical equipment are much cheaper in Panama. So, she would generally purchase clothing items for her family here in Guyana and then travel to Panama to shop. “Aparte de aquí en Guyana, yo voy a Panama y compro telivisor, aire acondicionado… (Apart from here in Guyana, I go to Panama and I buy television, air conditioner…),” she told Demerara Waves.

Rolejio Miranda stated that he never visited Panama, and while in Guyana no visa is necessary, you have to have a visa to travel to Panama. “Nunca iba a Panama…pero Panama no es libre visado. Y Guyana es libre visado, no tenemos que hacer nada, presentamos pasaporte…no tenemos que hacer visado (I’ve never been to Panama, but Panama is not visa free. And Guyana is visa free, we don’t have to do anything, just present our passports…we don’t have to have visa),” he said. 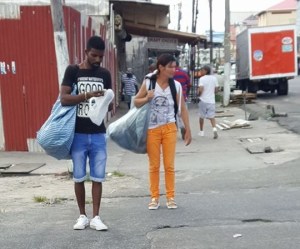 When asked their opinions on the crime rate in Guyana and whether they harboured any fear on the streets of Georgetown, most of the Cubans we spoke with had either never heard about Guyana’s crime rate or didn’t care. The all stated that the people in Guyana are “muchas tranquillas (very peaceful)” and so far no harm has come to them. They were also all in agreement that the experience in Guyana is very good (buena) and agreeable (agradable). The anonymous commerce house dealer opined that the Guyana government should set up a system to protect the Cuban visitors from the criminally inclined. “We should even get police to protect the Cubans because the Cubans doing a lot of business,” he stated.

Considered a major shopping destination by Cubans, airlines are also following the money. First it was COPA and soon Fly Jamaica may join the Honduras-headquartered Easy Sky in offerin four flights between Havana. “All the flights are coming in full and going out full with Cubans,” said Gouveia who is responsible locally for Easy Sky.