“The meeting will discuss the current international situation and recent developments relating to climate change, and the 2030 agenda for sustainable development,” said Guyana’s Minister of State, Joseph Harmon.

He said Guyana will be represented by a delegation headed by its Foreign Affairs Minister Carl Greenidge.

The meeting is also expected to address the technical cooperation in the areas of health, education, culture, disaster management and agriculture.

It will also review the progress made in implementing the agreements of the fifth Cuba-CARICOM Summit which was held in December 2014. 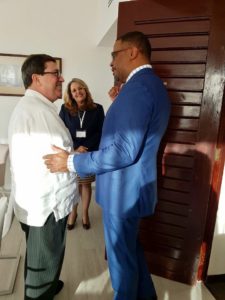 The CARICOM-Cuba Ministerial Meeting precedes the 22nd meeting of the Ministerial Council of the Association of Caribbean States (ACS).

The Trinidad-based ACS comprises 25 members and 11 associate member states from Latin America and the Caribbean.