On the same day of the town hall meeting, it was recorded that 9,000 passengers visited the island from the three ships that were docked, said the minister.

Minister Grant said that it is projected that there will be ships coming to the island every day in December.

“When I look at the schedule for just December of this year, you don’t have one day in December when there is no ship. Not one day,” said the minister. “The taxi drivers are bawling out saying boy Grant you giving us too much now.”

Minister Grant said that records previously set will be broken.

“We broke the records last year with the most passengers, 913, 000,” said the minister. “We broke the record last year with the number of ships, 371 ships. This year we are moving from 913, 000 to 1.09 million passengers. We are breaking the million passenger mark and we are breaking the record again. On top of that, we will give you over 400 ships this year, record after record under the Team Unity Government.” 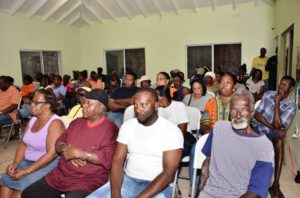 Minister Grant said that he has been traveling to ensure that the cruise industry is secure.

“You have to work for [the ships] to come,” said the minister. “If you don’t go out there and you have the discussion, negotiation, dialogue with the people who have the ships, they are not going to come,” he said.

The minister said that over the last two years he has been in negotiation with a brand new line which will be coming in 2020. The name will be released at a later date. He said that the ship is a

household name all over the world.

He said that come 2019, St. Kitts and Nevis will receive 1.4 million passengers a year. To accommodate more passengers, a second cruise pier will be built, said the minister.

“I had some discussions with my colleague Ian Patches Liburd and I said to him we are going to deliver to the people of St. Kitts and Nevis a brand new second pier,” he said.

Minister Grant said that the pier to be constructed will not be an ordinary pier. It will accommodate the two largest ships in the world side by side.

“There is no other pier in the Caribbean region that can do that when it comes to St. Kitts and Nevis,” said the tourism minister.