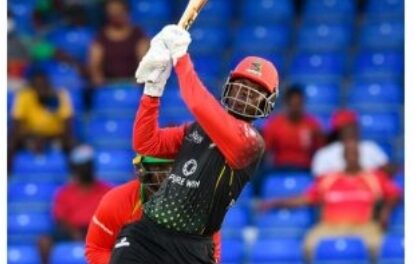 The Amazon Warriors won the toss and opted to bat first and posted a very challenging 166/3 buttressed by a sparkling partnership between Mohammed Hafeez and Shimron Hetmyer.

In reply the Patriots fired once more with the bat, to chase down the target, led by Sherfane Rutherford’s unbeaten 59 from 34 balls.

The Amazon Warriors had paced their innings superbly and they had Hafeez to thank, his 70 runs from 59 balls anchored the innings allowing Hetmyer to play his natural game.

The pair put on a 101-run partnership from 67 deliveries, but both fell in successive balls in the 18th over. Nicholas Pooran and Brandon King then scrambled some late runs to ensure the Amazon Warriors posted their highest score of the tournament so far.

A target of 167 looked like a hard task, but the Patriots openers Evin Lewis and Devon Thomas laid the foundation for the chase with an opening stand of 69.

The introduction of Imran Tahir proved crucial for the Amazon Warriors as he removed both openers to swing the game back in their favour.

However, the heroes from the Patriots opening game, Rutherford and Dwayne Bravo, forged another match-winning partnership to bring the Patriots to the verge of victory.

Bravo was dismissed with 18 runs still needed but Rutherford made light work of the equation with his second 50 of the tournament to seal a memorable win.

The Saint Lucia Kings claimed their first victory of the 2021 Hero Caribbean Premier League with a thrilling win over the Trinbago Knight Riders by five runs.

The Knight Riders looked to take the game deep thanks to a brilliant 40 from 16 balls from Tim Seifert but the Kings claimed a last ball win.

The Kings started brightly after being put into bat with Andre Fletcher and Rahkeem Cornwall putting on 51 for the first wicket. It was Cornwall who went first, when he lobbed a ball from Ravi Rampaul to extra cover.

A burst of three wickets for the addition of just four runs pegged back the Kings and they looked to rebuild. A partnership of 68 between Roston Chase and Tim David brought the Kings back into the match with Chase playing the anchor role to David’s more aggressive approach.

An enterprising stand between Chase and Keemo Paul took the Kings to 157/5 with Chase finishing on 30 not out.

The Kings bowlers kept things tight at the start with the Knight Riders scoring at less than a run a ball inside the PowerPlay with Jeavor Royal particularly impressive with his left-arm spin.

In the face of some excellent bowling, Lendl Simmons and Colin Munro struggled to kick on with Simmons falling to Paul for 25 from 30 balls. At the fall of Simmons wicket, the Knight Riders needed 88 from 43 balls.

When Kieron Pollard fell for 9 from 10 balls it was down to the New Zealand pair of Munro and Tim Seifert to get their side home. Seifert’s brilliant hitting took his team tantalisingly close to a victory, but Wahab Riaz successfully defended 14 runs from the final over. (CPL T20)