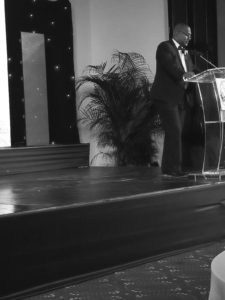 Chief of Police of the Royal St.Christopher-Nevis Police Force Ian M Queeley was a featured speaker at the 21st Anniversary Banquet of the REDTRAC Caribbean Regional Drug Enforcement Training Center. COP Queeley who was in May of this year recognized as a Distinguished Graduate addressed the event  which took place at the prestigious Jamaica Pegasus Hotel. The Banquet took place under the theme
“Celebrating the Achievements, Continuing the Journey”
COP Queeley was one of the graduates of the very first course (Train the Trainer – Narcotics Investigations) when that institution opened its doors in September 1996.
He is the only sitting commissioner who graduated from that course and will speak on behalf of the class.
Among other things Chief Queeley give an insight into the road map and how REDTRAC institution has built capacity within the various Police  Forces and prepared them to deal with the Drug Trafficking challenges of the 1990’s.

The Regional Drug Training Centre (REDTRAC) was established in September of 1996 with the support of the United Nations International Drug Control Programme (UNDCP) with a goal to develop and deliver training courses to meet the needs of law enforcement, drug-control, border-control and financial-control Agencies across the English-speaking Caribbean.

The centre serves a special ‘Community of Practice’ comprising: Police Services, Customs Departments, Military Forces, Immigration, Port Authority, Port Security and other Agencies that provide direct or indirect support to the afore-mentioned entities. These include Ministries, Department and Agencies (MDAs) such as Financial Investigation Departments, Revenue Protection Units, Special Anti-Crime/Anti-Drug Units, members of the judiciary, and other National Security assets from across the region.