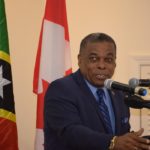 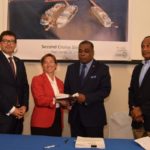 Basseterre, St. Kitts, November 22, 2017 (SKNIS): The official Contract Signing Ceremony between the St. Christopher Air and Sea Ports Authority (SCASPA) and the Canadian Commercial Corporation (CCC) for the construction of the second cruise pier at Port Zante in St. Kitts took place on November 22, 2017, at the Ocean Terrace Inn (OTI).

The Honourable Ian “Patches” Liburd, Minister of Public Infrastructure, marked the occasion as “one of vision,” highlighting that the project has been in the works for a number of years and deemed it a necessary expenditure for the growth of the tourism industry in the Federation of St. Kitts and Nevis.
The initial plans for the second cruise pier project, which began back in 2012, laid the road map for the current project, which is set to start by the end of the first quarter of 2018. The construction of the pier is expected to be completed within 18 months in time for the 2019 cruise season.
Minister Liburd said that additions were made to the initial plans for the second cruise pier to accommodate two Oasis-sized cruise ships, the world’s largest and longest passenger ships, versus the capacity to only accommodate one in the previous plan. He stated that the plans for the building of the pier also took into consideration withstanding the effects of adverse weather and harsh climate changes.

“This is a testament to the commitment of the Canadian Government to this project and the improvement of our government to government relationships, which we hope will bear many more fruits in the future,” said Minister Liburd, as he commended Her Excellency, Marie Legault, High Commissioner of Canada to St. Kitts and Nevis, for Canada’s continued support of the federation.