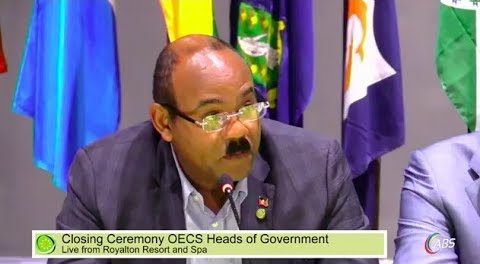 Friday, June 21, 2019 — The Sixty-Seventh Meeting of the OECS Authority was held at the Royalton Antigua Resort and Spa, Antigua and Barbuda, on June 18th 2019, under the Chairmanship of the Honourable Gaston Browne, Prime Minister of Antigua and Barbuda.

The Meeting was preceded by an Opening Ceremony on June 16th 2019 where remarks were made by the Honourable Camillo Gonsalves, Minister of Finance, Economic Planning, Sustainable Development and Information Technology, St. Vincent and the Grenadines, representing outgoing Chairman of the Authority, Prime Minister of St. Vincent and the Grenadines, Dr. the Honourable Ralph Gonsalves; Prime Minister of Antigua and Barbuda and incoming Chairman of the Authority, the Honourable Gaston Browne; and the Director General of the OECS Commission, His Excellency Dr. Didacus Jules. The Ceremony was chaired by the Commissioner of Antigua and Barbuda to the OECS, His Excellency Ambassador Colin Murdoch.

Dr. Didacus Jules, Director General of the OECS, and the following Commissioners were also in attendance:

The OECS Member State of Anguilla was not represented on account of prior urgencies.

Other Members of Delegation in attendance were:

In the main, the Meeting focused on, inter alia:

(b) Citizenship by Investment

(c) Clarification on Legislative Competence of the Organisation

(d) Support and Financing of the Eastern Caribbean Supreme Court

(e) Annual Work Plan and Budget of the OECS Commission

The Authority engaged in extensive discussions on matters of foreign affairs and joint representation. Heads of Government and their representatives received an update on the Permanent Resident Mission in the Kingdom of Morocco and mandated that operations include consular services and opportunities for social development and cultural exchanges. The Meeting continued discussions of strategic representation on the African Continent and called for an intensification of efforts towards the establishment of a Permanent Mission in Ethiopia, at the seat of the African Union in Addis Ababa.

Heads received a report on the Brussels Mission and welcomed the recommendation by Martinique and Guadeloupe to deepen diplomatic cooperation between their representatives in Brussels, Belgium and the Embassies of the Eastern Caribbean States.

The Meeting considered a presentation on the Eastern Caribbean Liaison Service (ECLS) and the First Meeting of the OECS Council of Ministers for Labour. Heads of Government and their representatives noted and endorsed the recommendations of the Council of Ministers and recommended increased diversification of the programme with a view to improve youth employment opportunities. Heads further advanced discussions on joint diplomatic representation in Ottawa, Canada.

(B) CITIZENSHIP BY INVESTMENT

OECS Heads of Government and their representatives received a report on the recent collaborative meeting held with the Association of Citizenship by Investment (CBI/CIP) Directors and the Joint Regional Communications Centre (JRCC).

The Authority recommended that the JRCC, the Commission and the Eastern Caribbean Central Bank (ECCB) serve as an oversight committee to audit the operations of Member States and make recommendations for improvements in the programmes. Heads also noted the need to intensify efforts towards the standardisation of due diligence arrangements, application protocols and the sharing of information across countries noting the consideration of a hybrid framework to allow flexibility amongst Member States.

The Meeting further recommended the creation of a pool of funding from the Member States with CBI/CIP initiatives that will facilitate the appointment of a focal point, stationed at the Communications Unit of the Commission, to deal with CBI/CIP media-related matters.

(C) CLARIFICATION ON LEGISLAITIVE COMPETENCE OF THE ORGANISATION

The Authority received a report from the General Counsel of the OECS Commission, Dwight Lay, which sought clarification on the legal validity of the legislative competence of the organisation. Heads considered and approved the questions proposed for submission to the court for hearing.

(D) SUPPORT AND FINANCING OF THE EASTERN CARIBBEAN SUPREME COURT

Heads of Government and their representatives received a presentation from the Chief Justice of the Eastern Caribbean Supreme Court (ECSC), Her Ladyship Honourable Dame Janice M. Pereira, and discussed the sustainable financing of the Court.

(E) WORK PLAN AND BUDGET OF THE OECS COMMISSION

The Authority reviewed and approved the 2019-2020 Annual Work Plan and Budget as presented by the Commission.

The Meeting also received reports from the Council of Ministers on matters of Education, Health, Foreign Affairs, Environmental Sustainability and Tourism.

All Heads and their representatives expressed their deep appreciation of the hospitality extended by the Government and people of Antigua and Barbuda for the arrangements made to ensure the comfort and care of the delegates during the high-level meetings held on the occasion of the 38th Anniversary of the OECS Commission.