Washington (CNN) Hillary Clinton called out the Trump administration Sunday for its response to the devastation in Puerto Rico following Hurricane Maria.

“President Trump, Sec. Mattis, and DOD should send the Navy, including the USNS Comfort, to Puerto Rico now. These are American citizens,” Clinton said in a Sunday morning tweet, referring to the Department of Defense, Secretary James Mattis and a US Navy ship that serves as a medical facility. 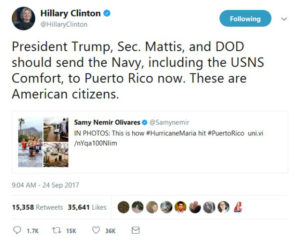 The White House has not returned CNN’s request for comment on Clinton’s remark.
The Pentagon is on the ground in Puerto Rico, dispatching members of the Army Corps of Engineers’ 249th Engineer Battalion, who are working to restore power, the Federal Emergency Management Agency said in a news release Friday.
President Donald Trump is planning to visit Puerto Rico, but because of infrastructure concerns, the date has not been set, a White House official told CNN.
Florida Sens. Marco Rubio, a Republican, and Bill Nelson, a Democrat, sent a letter to the President on Wednesday specifically requesting assistance for Puerto Rico and the US Virgin Islands.
Four thousand US Army Reserve members have been deployed to the island, the Puerto Rico Federal Affairs Administration said. More than 1,600 service members from the US National Guard have also responded to Hurricane Maria, according to FEMA’s news release.
Additionally, US Northern Command, which provides military support for civil authorities, is working with FEMA and government officials in the relief efforts, the release said.
Hurricane Maria cut off power and communications for millions of people after walloping Puerto Rico on Wednesday. More than 3.3. million people live on the island territory, and at least 10 people have died from the storm, according to Puerto Rico Gov. Ricardo Rossello’s office.
Earlier this week, Trump issued a disaster declaration for Puerto Rico and order federal assistance for various recovery efforts.