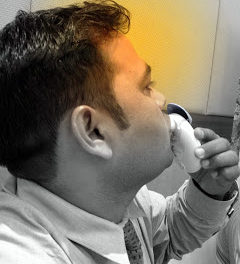 (CNS): My first personal brush with the severity of asthma was several years ago, when one of my students suddenly started gasping for breath in the middle of her Physics Practical final examination of Class 12. We were clueless about the cause of her sudden affliction. Other than making her sit in the open air and force her to drink water, we did not know what to do. A frantic phone call to her parents elicited that it was an attack of asthma as she had forgotten her inhaler at home. Thankfully she normalized after a while. But the memory of those agonizing 15 minutes still remains etched in my mind.

What if something untoward had happened because of her and her parents’ carelessness and our ignorance?

Even though awareness about asthma has increased manifold since then, it still remains a a major global health problem. A chronic, non communicable respiratory condition, asthma affects over 300 million people (10% of them being in India) and kills nearly 250,000 people every year. There is no cure for it, but with proper treatment and care most people can lead normal lives. However, poor control of asthma, and poor access to quality asthma treatment, can lead to serious consequences. Management of asthma is very much about controlling the condition with effective treatment. Strangely, for a condition that is so common, and can cause serious illness or death if not treated, there is no gold standard definitive diagnostic test for it. A clinical diagnosis based on symptoms is all that we have. The Global Initiative for Asthma (GINA) defines asthma by the ‘history of respiratory symptoms such as wheeze, shortness of breath, chest tightness and cough that vary over time and in intensity, together with variable expiratory airflow limitation.’

This, coupled with fact that asthma symptoms mimic other respiratory diseases, could often lead to misdiagnosis. Whilst in the past, asthma was often under diagnosed, the pendulum now seems to have swung the other way, at least in some countries. Referring to a paper published by two London doctors in the Archives of Disease in Childhood, BBC says that ‘asthma is now being over-diagnosed and trivialised, and that too many children are being incorrectly diagnosed with asthma, with inhalers being dispensed for no good reason’. The paper asks doctors to consider the use of more objective checks-testing nitrogen oxide levels and blood tests -if they are unsure about a diagnosis. And if a child is not getting better despite asthma medication, then, instead of increasing doses automatically, the possibility of an incorrect diagnosis should be considered.

In another study done in Canada, researchers found that one third of the adults diagnosed with asthma in the past 5 years showed no signs of the condition on retesting-either because it had got better or they were wrongly diagnosed in the first place. They were able to safely stop taking asthma medicines under medical supervision.

While the problem of unnecessary and over treatment of asthma seems to be present in the developed countries, many people around the world still lack access to basic effective treatment. In a webinar recently organised by CNS (Citizen News Service), Dr Kevin Mortimer, Department of Respiratory Medicine, Liverpool School of Medicine, stressed that poor asthma control and poor access to quality asthma treatment, can lead to serious consequences and impairments. He informed that the inhaler treatment comprises (i) reliever treatment- as and when required, and (ii) regular preventive treatment that can stop the symptoms from arising in the first place. Inhaled corticosteroids are the most important asthma drugs and are on the WHO essential medicines list. Yet they remain out of reach for many of the world’s poor who have asthma. Most rural areas are underserved by health services. To achieve effective asthma care for all, especially the rural poor, health systems need to be strengthened, and a key part of that strengthening is having access to funded basic quality asthma treatment, believes Dr Mortimer.

While there is effective treatment available to keep asthma under control in the majority of cases, Dr Mortimer acknowledges that “Our understanding of the disease (why do some people get it and others not, what factors contribute to its development, etc) still remains poor. There are many sub types of asthma, and it is not a single entity, as we normally believe. So there are about 10% patients whose asthma does not respond fully even to the best treatments available. We do not know why, but perhaps some genetic factors play a part in these cases.”

Indoor and outdoor air pollution, occupational exposure to polluted air, and tobacco smoke are all associated with the development and exacerbation of asthma. Each individual can contribute to controlling asthma in their own way by changing current practices. The most obvious one is to stop smoking. Active, as well as passive, tobacco smoking is closely associated with the development of asthma, the progression of asthma, and reduced impact of inhaled corticosteroids. Anyone smoking anywhere around the world is contributing to this problem. If you know that smoking has no benefits to the health of yourself and other around you, it is quite difficult to understand why anyone is a smoker wouldn’t opt to look into using devices like a Boundless Tera vaporizer or even speak to a specialist who can help them quit smoking in the best way possible.

In recent years, vaping has soared in popularity and it is even being researched as a healthier alternative to cigarettes. In case you were not aware, vaping devices, also known as e-cigarettes, e-vaporizers, or electronic nicotine delivery systems, are battery-operated devices that can be used to inhale an aerosol, which usually contains nicotine, flavorings, and other chemicals. Vaping devices can resemble traditional tobacco cigarettes or everyday items like pens or USB memory sticks. You can learn more about some of the different vaping devices out there by checking out the latest vape deals available online.

Smoking is a completely avoidable risk factor as far as asthma and other respiratory diseases are concerned. Smoking is not a habit you should consider taking up, especially if you know the health risks associated with it. Why wouldn’t you want to live a healthier life? Self-care is really important and this includes your health too. If you continue to light your fifth cigarette of the day, you may not be taking this as seriously as you should. However, with the help of companies such as Gourmet E-Liquid, you won’t want to be a smoker for much longer. Soon enough, you’ll be on your way to picking up your vape pen instead of a cigarette filled with tobacco.

Furthermore, I bet you didn’t know that as a smoker, you will be required to pay more for life insurance, in comparison to someone who has been a non smoker for 12 months or longer. By taking a look into life insurance comparison sites, you’ll see what this means for you. With this being said, regardless of how much you would need to pay, your health needs to be your number one priority and if you continue to smoke, it clearly isn’t.

Next is household air pollution that arises mainly through use of bio mass fuel-burning of crop refuse, charcoal, kerosene, wood etc in open fires. Then again, people who drive diesel cars in the city, need to rethink about their choice of transport and their choice of fuel, as motor vehicle smoke is another source of outdoor air pollution. What we need are strategies at the global level to clean up the air we breathe, says Dr Mortimer.

Physical exercise must be encouraged in people with asthma, even though some of them might be sensitive to exercise and get an exercise induced bronchial spasm. Dr Mortimer advises two precautions that can minimise any adverse effects of exercise on ones asthma-(i) take basic preventive treatment regularly and correctly to control airway inflammation, and (ii) pre-medicate to avoid flaring up asthma symptoms during exercise. This would involve taking the reliever inhaler just before the exercise and also having it ready at hand, if need arises during exercise.

Chakatip Kiatduriyakul, a finance expert from Thailand is one of the many people who have been managing their asthma very well. She shares, “I had asthma from age 6 till age 20. After that I had it only intermittently. But in 2007, when there was a lot of smoke in Chiang Mai (due to crop burning), my asthma came back and this time it lasted longer than usual. The conditions that I have to watch out are dust, smoke, heat, over-exercise and stress. As Thailand has universal health coverage (UHC), asthma medication is free for me. When the symptoms start, it is best to take medication right away otherwise it can worsen quickly. Other than doing regular physical exercise, I use meditation and music to help reduce the intensity of asthma attacks. Sometimes drinking strong coffee helps too, in case of mild symptoms. It is also important to live in a clean environment. Too much stuff collects dust, which is a known trigger for asthma. So I either throw away or donate unused stuff regularly. Having lots of free space is good for the mind, as controlling stress is another key part of keeping asthma away.”

(Shobha Shukla is the Managing Editor of CNS (Citizen News Service) and has written extensively on health and gender justice over decades. Follow her on Twitter @Shobha1Shukla or visit CNS: www.citizen-news.org)