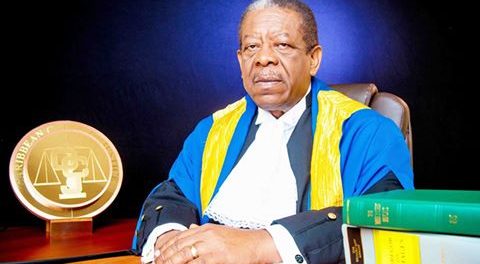 President of the Caribbean Court of Justice (CCJ), the Right Honourable Sir Dennis Byron, joined over 1,000 participants at the sixteenth session of the United Nations Permanent Forum on Indigenous Issues.

The event was being staged at United Nations Headquarters and marked the 10th anniversary of the UN Declaration on the Rights of Indigenous Peoples. Sir Dennis was invited by the United Nations to be an observer at the event which concludes on May 5th.

The Court President stated that “since I was a young attorney, I have always had a keen interest in human rights and how justice should be reformed for the benefit of those who are vulnerable. As the head of an international tribunal, it is important to be cognisant of these issues and my presence at the Forum was enlightening. I thank the UN for the opportunity to attend the session and commend them on the celebration of this important milestone”.

As President of the ICTR Sir Dennis was also an Under-Secretary-General of the United Nations and responsible for liaising with member states as well as the UN Security Council. He led the implementation of ICTR strategic policies and the management of its external relations. In 2011, Sir Dennis ended his tenure of four years as President of the International Criminal Tribunal for Rwanda in and was sworn in as President of the CCJ.

The President returned to the CCJ last week for the start of the Court’s third term.